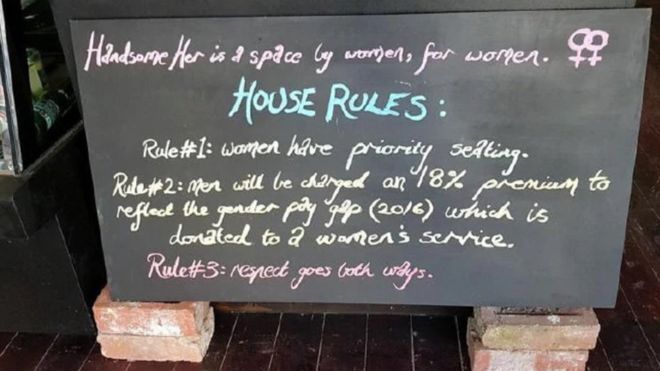 Handsome Her was accused of reverse sexism after opening in Melbourne in 2017. Its owners provoked debate by offering women priority seating and charging men an extra 18% one week a month.

Although non-compulsory, the “man tax” reflected “the gender pay gap”, the owners said.

Two years on and the owners have announced they will cease trading on 28 April.

They made the announcement in the description of a Facebook event created to advertise their last day of business.

The reaction to the man tax “showed us how fragile masculinity is and solidified the necessity for us to confront and dismantle patriarchy”, they wrote.

“We were just one little tiny shop on Sydney Rd that was trying to carve out a swathe of space to prioritise women and women’s issues, and suddenly we became the punching bag of Melbourne and the internet,” they added.

They denied reports that the man tax had run their “business into the ground”, saying they “just don’t want to own a café anymore”.