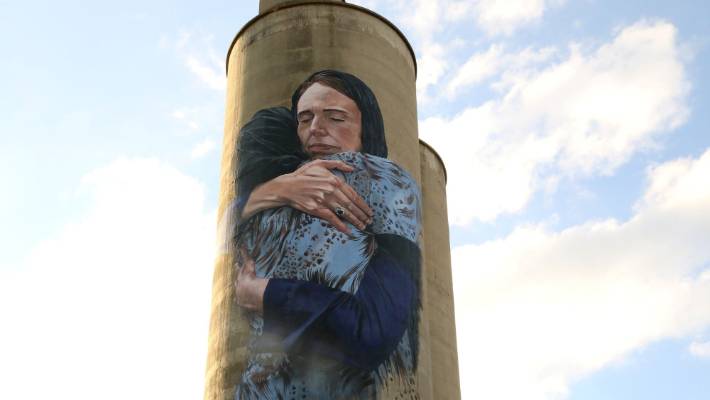 Artist Loretta Lizzio, says as she worked on the silos, high up on a boom lift, passersby would shout “we love it!” and “keep up the good work!”.

On the ground, strangers hugged her, or were moved to tears as the 18-metre-high image of the New Zealand Prime Minister embracing a Muslim woman took shape.

“One mother said to her little girl of about three, ‘what does that look like’? and the girl said, ‘Mummy giving hug’. It was really cute,” says Lizzio.

The image is based on a photo taken by Hagen Hopkins after the March 15 massacre of 51 Muslims in Christchurch. Lizzio said the planned word ‘peace’ in Arabic at its base was dropped because the image said enough.

One of the project managers, Tamara Veltre, said the mural was the idea of residents, including herself, of The Commons building overlooking the silos who “wanted to make people feel better” after “this awful thing that happened [the massacre]”.

They saw Hopkins’ photo “and thought, wouldn’t it be great if we could get that painted on the silo”.

The silos’ owner, and Moreland Council, approved the project within weeks.

“I see people riding up the bike path stop and take a photo. People are saying things like ‘I’m going to go home and hug my family. I’ve seen people hug Loretta. It’s really beautiful to watch. That’s the effect we were hoping it would have.”