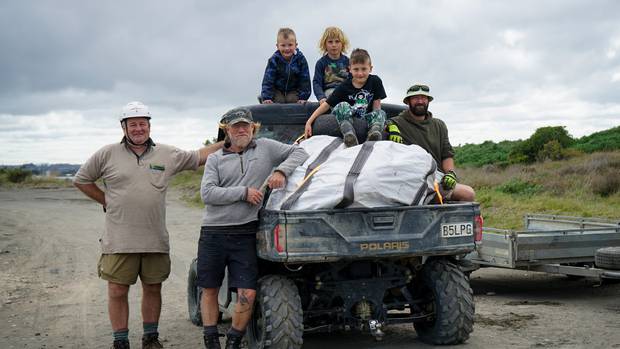 The group ridding South Beach of rubbish piled two vehicles high with tyres, bottles and cans before heading off to clear Castlecliff Beach as well.

The final actions for Conservation Week were the two beach clean-ups on September 22.

A group of about 15 worked South Beach from South Mole to Kaitoke Stream, Conservation Department community supervisor Peter Lock said. Among them were Downer staff and children from Whanganui’s Kiwi Conservation Club.

They found more rubbish than last year, Lock said. He was surprised at the sheer volume.

There were many tyres, which are expensive to dispose of at landfills. The children enjoyed finding a washing machine, which was removed, and polystyrene, bottles and cans.

There were a lot of plastic bottles, which will be cleaned before being taken to the Whanganui Resource Recovery Centre.

After the morning’s effort Lock was heading to Castlecliff Beach for the same purpose during the afternoon. He didn’t expect to find as much rubbish there.

“Castlecliff residents are pretty good at taking care of it themselves.”