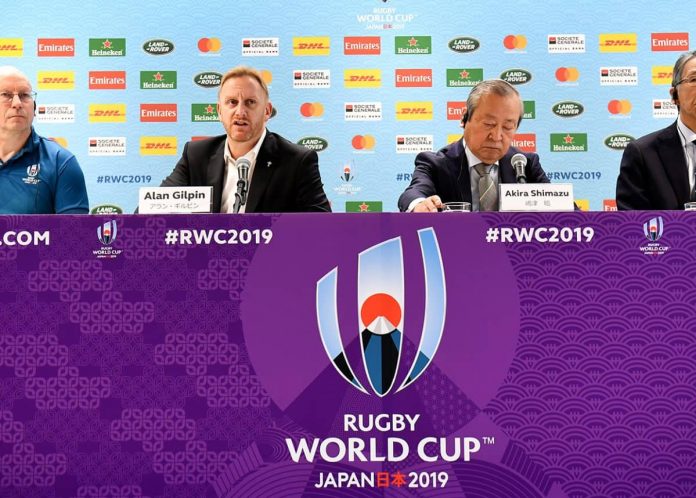 Tournament director of the Japan 2019 Rugby World Cup Alan Gilpin (2nd L) and Japan Rugby CEO Akira Shimazu (2nd R) speak to the media, as they announce that selected games will be cancelled as typhoon Hagibis approaches, in Tokyo on October 10, 2019

World Rugby has cancelled All Blacks’ clash against Italy on Saturday.

Cancelled games are recorded as 0-0 draws, with both teams awarded two points.

The game, set to played in Toyota on Saturday, was canned due to the looming Typhoon Hagibis bearing down on Japan by World Rugby in a decision announced at 4.00pm on Thursday.

How the world media reacted to Typhoon Hagibis and the cancellation of two World Cup matches including the All Blacks’ clash against Italy.

“There were tears at Italian training, pent-up anger in the Scotland camp, stoicism from Eddie Jones, hard-nosed All Black pragmatism from Steve Hansen, regrets and befuddlement among supporters, a swirling, broiling mix of emotions that mirrored the monstrous ball of energy that is about to dump on Tokyo. Whatever mayhem Typhoon Hagibis leaves in its wake it will have to do something rather extreme to eclipse the fury and bafflement that attended the decision to cancel two pool matches with a major doubt also hanging over Japan’s crunch match against Scotland in Yokohama on Sunday.

“The Japanese are used to typhoons. They are not used to such vehement denunciation, such blasts of hot air, such stormy verbal weather, Typhoon Outrage. Of course it is only right to critique World Rugby. This will forever be *RWC2019, the footnote tournament.

“But it does not mean that the decision to take the event to Japan was the wrong one. If it were, where have all those naysayers been over the last four weeks, silent as the paens of praise were heaped upon the organisers for having the vision and the boldness to strike out into the virgin market of Asia, with its embracing people, its engagement and exoticism, and its buoyant team who are threatening to break the masonic bond of the brotherhood and claim a seat at top table?”

“If they (Italy) had won that match against the All Blacks, they would have gone through to the quarter-finals. Italy’s odds of doing it were a lot longer than Scotland’s are but, as their coach, Conor O’Shea, said: “We had the chance.”

“Not any more. Gilpin said World Rugby is working on the principle that “if we can’t do it for all, we shouldn’t be doing it for any” because “we have to apply consistency to our contingency plan across all the games and we treat all the matches fairly”.

“It is hard to argue Scotland should have a chance denied Italy just because they are more likely to take advantage of it.

“The problem, really, is the contingency plan World Rugby is “applying consistency to” seems to be to cross its fingers and hope the typhoon veers away, then, when it does not, to cancel everything and warn everyone to stay indoors. With 10 years to get ready, you would think it would have come up with something better.”

“There must be some wiggle room here. Logistically impossible? Surely not.

“There are six days between the last pool match, between Scotland and Japan, and the first quarter-final in Oita next Saturday.

“Sides have had four-day turnarounds as a matter of course during the pool stage. How can it be that difficult?

“Sergio Parisse has been deprived a swansong to his fine career by the cancellation of Italy’s game against New Zealand.

“His teammate, Leonardo Ghiraldini, was reportedly moved to tears when he heard the news that he, too, was set to be denied one last game for his country.

“And, however unlikely it was that Italy would beat the All Blacks with the requisite try-haul to make it through themselves, this was still a live fixture.”

The view from Scotland: World Rugby can’t even maintain the pretence of sporting integrity when it comes to handling Scotland’s do-or-die showdown with Japan –John Greechan of Mailonline

“And, no, the fact that rugby superpowers New Zealand, England and France have all had matches cancelled doesn’t prove – as some have rather ridiculously claimed – that World Rugby are being even-handed in their treatment of all nations.

“If any one of those three still needed bonus points to reach the quarter-finals, you can be absolutely certain that tournament organisers would have found a way to make their final group games go ahead.

“They would have taken the All Blacks to play Italy in Auckland on a gold-plated charter plane if it meant keeping them around.

“Scotland? Meh. File their complaint alongside that of the Italians and other non-members of rugby’s most exclusive club.”