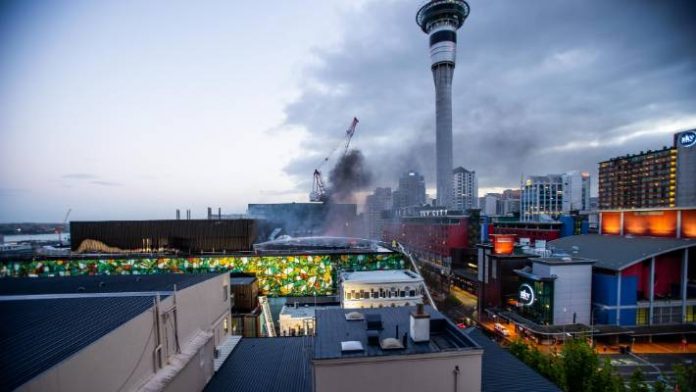 A large inferno at the SkyCity Convention Centre has been put out, Auckland Mayor Phil Goff has confirmed. Firefighters now plan to move into mop up operations.
There were hopes the fire would be put out on Wednesday evening but flames appeared again early on Thursday.
But at 8.45am, the fire had been completely extinguished.

“Remaining sections of the roof of the convention centre continued to burn last night, but the fire has significantly reduced in size and we expect to move into mop up operations later today,” Fire and Emergency NZ said earlier on Thursday morning.
A thin noxious haze rose from the roof as of 7am, different to the thick black smoke that has been covering the city in previous days. The damage to the roof could be seen, and the northern end of the roof near Hobson St had partially caved in. At 8am, four firefighters armed with heavy power tools were working to remove sections of the scorched facade at the centre of the tiered roof.

Speaking to TVNZ, Fire and Emergency regional manager Ron Devlin said the fire had slowed down overnight. Devlin said the roof of the building was not burning in the way a normal roof would and that “it’s quite a complex piece of work”. He said it was still too early to say what damage had been done to the building.
“It’ll probably be a couple more days before the road around it reopens.”