At the NZ Music Awards, Avantdale Bowling Club star Tom Scott took his opportunity on stage to deliver a message to the PM Jacinda Ardern, who was in the audience.

Accepting the award for best hip hop artist, Scott made a specific note to say: “Jacinda Ardern should go to Ihumātao!” 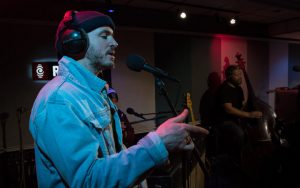 The moment, which took place during an ad break and was not televised, was a reference to the long-held occupation of Ihumātao in Auckland, in a bid to protect the land from a housing development planned by Fletcher Building.

The organisers of the occupation have been trying to get Ardern to head to the frontlines for months, but to avail.

Scott isn’t he first star to speak out either – this comes after All Black TJ Perenara made a show of solidarity – and headlines – by wearing an arm band with “Ihumātao” written on it during a match back in August.