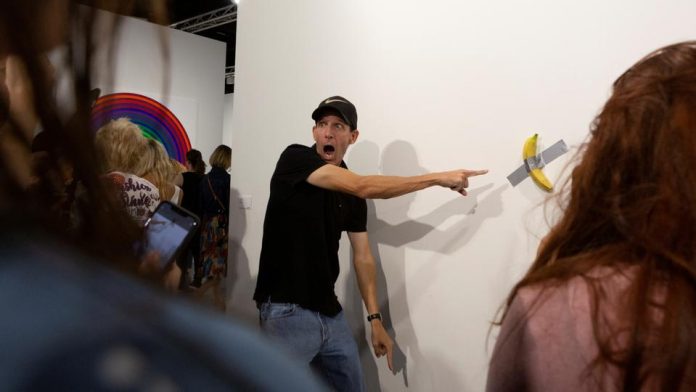 One of North America’s most prestigious art shows has become the venue of one of the more stranger sales of art in recent times. Entitled “Comedian”, the piece consists of  a literal banana (slightly bruised), duct-taped to a wall, and has sold for US$120,000 (NZ$182,612).

The prized installation, by Italian artist Maurizio Cattelan, was unveiled at the Art Basel Miami Beach on Wednesday by the Parisian contemporary art gallery Perrotin.

Despite the title of the piece, Perrotin insists the work is not a joke, with everything from the shape of the banana to its placement in the installation given a great deal of consideration. Cattelan himself has offered no direction on how to interpret the work, but MrPerrotin previously told CNN the bananas are “a symbol of global trade, a double entendre, as well as a classic device for humour”.

The question on everyone’s lips of course was what was to be done in the inevitable case of the work decomposing, however the owners of the work have not been given any advice on the matter, with gallery saying “if the banana moulds, a decision on that will be made on site”.

Seems it wasn’t ever meant to go mouldy though, a performance artist decided to take advantage of a snobby art crowd by walking up to the banana, and eating it in front of everyone:

In a video posted on his Instagram account, David Datuna, who describes himself as a Georgian-born American artist living in New York, walks up to the banana and pulls it off the wall with the duct tape attached.

“Art performance … hungry artist,” he said, as he peeled the fruit and took a bite. “Thank you, very good.”

But the kerfuffle was resolved without a food fight.

“He did not destroy the artwork. The banana is the idea,” Lucien Terras, director of museum relations for Galerie Perrotin, told the Miami Herald.

As it turns out, the value of the work is in the certificate of authenticity, the newspaper reported. The banana is meant to be replaced.

A replacement banana was taped to the wall about 15 minutes after Datuna’s stunt.