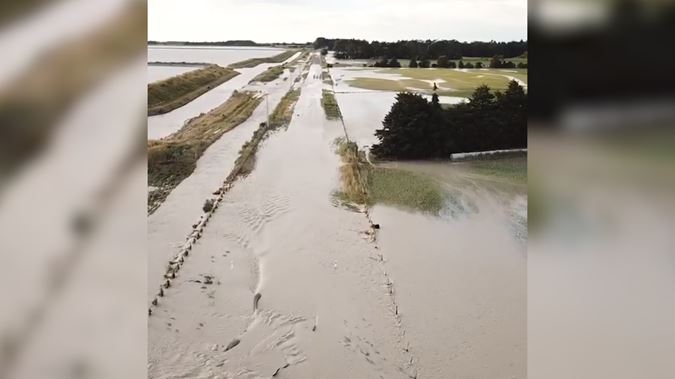 Sourced from the NZHerald.co.nz

Aerial footage posted by the Timaru District Council has shown the extent of the flooding damage to SH72, with water swamping massive sections of the road just south of the Rangitata Bridge which appears to still be standing despite the torrent of water smashing through.

The country’s main north-south route, State Highway 1, has also been cut off between Christchurch and Dunedin.

The video begins at the southern approach to the bridge, on Geraldine-Arundel Rd [SH72], which shows large sections of the road having been chewed up and spat out by the water from the Rangitata River after it burst its banks yesterday.

Hi Folks, here’s a bit of insight into what we’re dealing with up at Rangitata. The first stage is to get rid of the water, then we’re working to try and create a driveable surface. It’s going to take a while but we’ve got our roading team on it.

NZTA have been inspecting the flood damage but access had been limited. Due to the flooding and road damage, the bridge is still unable to be assessed.

State Highway 6 on the South Island’s West coast was closed from Hokitika down to Makarora, with several slips on the road. Settlements on the highway were cut off from each other because of the damage.