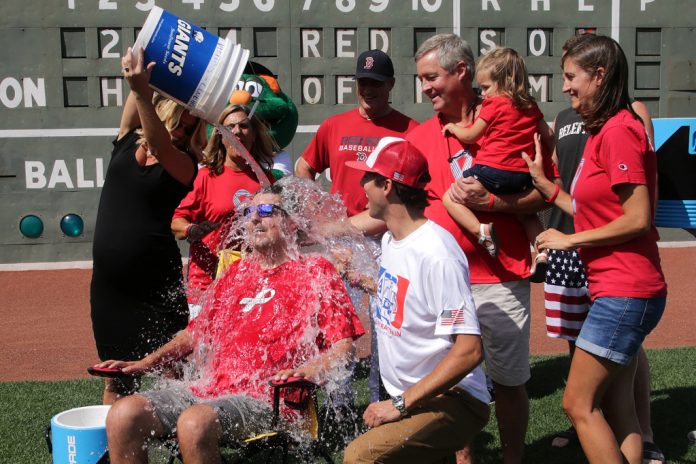 Pete Frates, the former college baseball star whose battle with ALS inspired the Ice Bucket Challenge, has passed away at the age of 34.

The ice bucket challenge that has raised more than US$200 million worldwide.

Frates died peacefully, surrounded by his family, they said in a statement.

“Today Heaven received our angel: Peter Frates. A husband to Julie, a father to Lucy, a son to John and Nancy, a brother to Andrew and Jennifer, Pete passed away surrounded by his loving family, peacefully at age 34, after a heroic battle with ALS,” the statement read.

“A natural born leader and the ultimate teammate, Pete was a role model for all, especially young athletes, who looked up to him for his bravery and unwavering positive spirit in the face of adversity. He was a noble fighter who inspired us all to use our talents and strengths in the service of others.”

The ice bucket challenge began in 2014 when pro golfer Chris Kennedy challenged his wife’s cousin Jeanette Senerchia, whose husband has ALS, also known as Lou Gehrig’s disease after the New York Yankees great who suffered from it.

ALS patient Pat Quinn, of Yonkers, New York, picked up on it and started its spread, but when Frates and his family got involved, the phenomenon exploded on social media.

The challenge, in which more than 17 million people participated, raised over a whopping US$200 million worldwide, according to the ALS Association.

In 2014 he launched the ALS Bucket Challenge, which captured the attention of millions of people worldwide including celebrities like Oprah Winfrey, Bill Gates, Will Smith and Lady Gaga.

In October 2014 the New England Council named him the ‘New Englander of the Year for his pioneering work in raising ALS awareness. In December 2014 he was named one of Sports Illustrated’s Inspirations of the Year.

He also received the NCAA Inspiration of the Year Award in 2017.