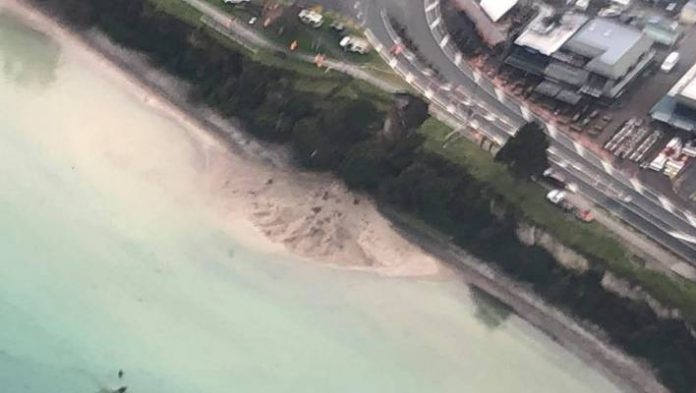 Sourced from the Taupō District Council

Taupō District Council has welcomed the Waikato Regional Council’s decision not to prosecute over the wastewater spill into Lake Taupō in July.

A water main broke just after 2pm on July 2 causing a large washout on the lakefront. About an hour later the footpath collapsed and took out a wastewater pipe causing around 800,000 litres of wastewater to enter the lake. It was October before full restoration was complete and the road could reopen.

Waikato Regional Council announced earlier this afternoon that it would not initiate a prosecution following a thorough five-month independent investigation into the incident.

“This was a unique set of circumstances. Our investigation has determined that it would not be appropriate for any person or entity to face formal enforcement action,” Waikato Regional Council investigations manager Patrick Lynch said in the announcement.

In this case, the incident was not foreseeable, was beyond anyone’s control, and was adequately mitigated, he said.

However, despite the findings, Mayor David Trewavas is unreservedly apologising to Ngati Tuwharetoa, the Waikato River iwi, the affected businesses, and the wider community for the distress and disruption the incident caused.

Mr Trewavas said the spill was the biggest environmental disaster the council had ever faced.

“To see the hurt and anguish on people’s faces following the spill was absolutely heart breaking,” he said. “I shared that pain given the importance of the lake to our community. I felt absolutely powerless that despite our quick response and pulling in all the resources we could immediately following the incident, what had happened could not be undone.”

Chief executive Gareth Green said staff had co-operated fully with Waikato Regional Council, and had provided all the technical information it had, including the results of laboratory testing of the pipes. That testing showed the pipe material had at least 50 years of life remaining, and the installation had been done correctly.

“It was a harrowing experience for staff to be subject to such an intense investigation and I am incredibly proud that the actions of those staff have been independently vindicated, particularly when it showed the response exceeded what is considered to be best practice,” he said.

To help alleviate any further risk, the repairs had seen the pipes moved away from the lakefront and work was continuing on the development of robust asset management plans and delivering on a comprehensive renewals programme. A new risk assessment tool was also being implemented to help the council identify key areas of risk on the lakefront to assist staff with their planning.