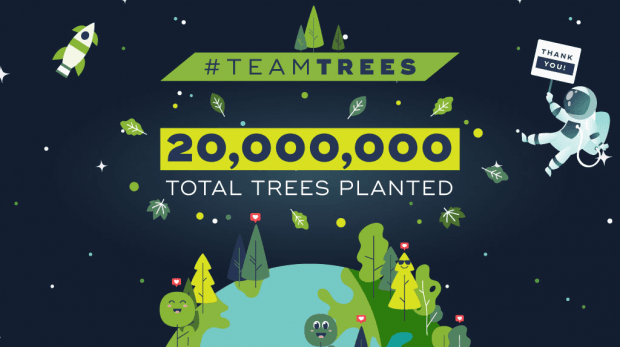 A bunch of YouTubers who joined forces to kick start the Team Trees initiative have hit their 20 million tree planting goal in just two months.

The whole thing was started by MrBeast (real name Jimmy Donaldson) back in May when he hit 20 million subscribers and asked his fans what he should do mark the achievement. It turns out his fans were pretty keen on him making the world a little bit greener.

So, MrBeast set about encouraging his fellow YouTubers, including Mark Rober, Ninja and Jacksepticeye, to help out.

And, in October this year, it was announced that they would collectively call on their hundreds of millions of subscribers to donate to the Arbor Day Foundation – a charity that plants trees in the US – and the Team Trees movement was born.

Not to be outdone, Shopify CEO Tobi Lutke, donated $1 million and then chucked in an extra dollar, to celebrate reaching one million customers.

And of course, as well as those rich folk, lots and lots and lots of ‘ordinary’ people also dug deep and now the total raised has topped $20 million.

Sharing the good news, the official Team Tree Instagram account wrote: “Twenty million trees – in less than two months – is an incredible accomplishment and it belongs to all of us.

You can find out more about the campaign, or donate, here.