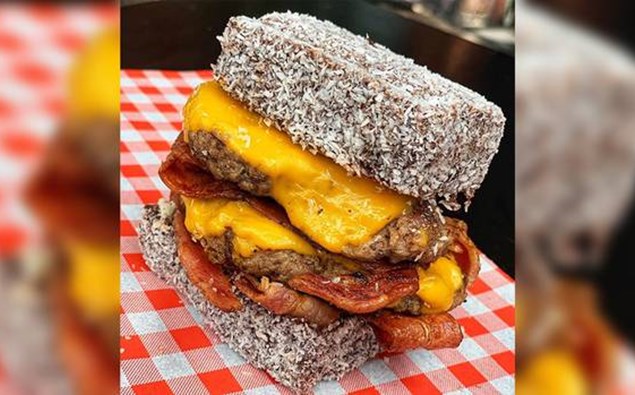 An American-style burger restaurant has created an epic double beef and cheese burger sandwiched between lamingtons just in time for Australia Day.

As part of the weekly special, diners can order the mammoth burger from January 26 at the Chuck Wagon 175 in North Adelaide.

In an unusual mash-up, the sweet and savoury creation comes complete with double beef patties, bacon and cheese with the country’s iconic cake used as the buns.

Many admitted they were keen to give the burger a go, while others demanded to know why the restaurant left out ingredients such as pineapples, pickles, beetroot and egg.

Denis said: ‘Are these cream filled lamingtons or plain? Just trying to work out how many extra cholesterol tablets I’d need to take.’

However, not everyone seemed on board with the unusual combo – as many described the creation as ‘wrong’, ‘totally gross’ and ‘terrible’.

Dianne said: ‘Who on earth thinks up these things? Would never have thought to put these things together.’