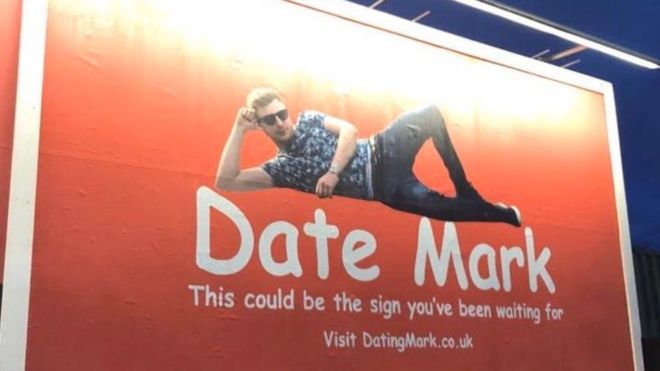 A single man who is desperate to find a girlfriend has purchased a massive billboard advertising himself out to potential bachelorettes.

UK man Mark Rofe has been single for more than a year and noticed all of his friends are getting married while he struggles to land a date.

Instead of sitting on his backside, he decided to put himself on the market, paying NZ$850 to advertise his website where interested women can submit an application to date the 30-year-old.

I’m at the billboard.

Regret not getting my haircut first.

The billboard, which sits in Manchester, 3m high and 6m wide, with a photo of Mark laying down and the caption: “Single? Date Mark. This could be the sign you’ve been waiting for.”

“I’m Mark, an extremely handsome and modest 30-year-old living in Sheffield. I work in marketing, and if you’re reading this, then I must be pretty OK at it,” he wrote on his website.

“You’re probably here because you’re interested in dating me (thank you, I’m flattered), or you’re just wondering WTF this website is about.

“All my friends are getting married, and I’m struggling to get a date.

“I’ve tried the dating apps, but they just weren’t working for me, so I decided to try something a little bit different to try and stand out.”

Rofe, who jokes he has kissed “over three” women, works in marketing but insists his campaign is totally legitimate.

He describes himself as “extremely handsome and modest”.

Rofe revealed he has so far had over 1900 applicants and is adamant he will find love.