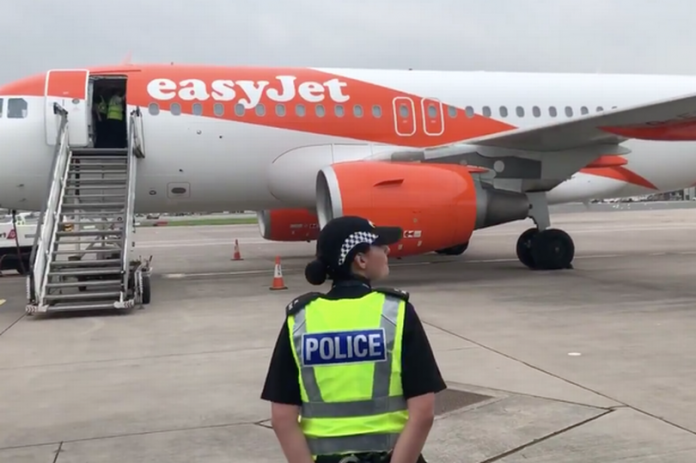 A British man is facing jail after subjecting crew and passengers to a barrage of insults, harassment, and drunk behaviour, which culminated in the plane being diverted as he started to eat his mobile phone.

The drama on the Easyjet flight from Manchester to Iceland began when Matthew Flaherty started drinking a bottle of gin he pulled from his bag, reports Edinburgh Live.

The 44-year-old then tried to chat up a fellow passenger, and when she ignored him, he told her to “f… off” and that he was going to kill her family.

He then picked a fight with a man who was trying to get his bag from the overhead locker.

The pilot was informed and the plane, which was carrying six crew and 142 passengers, was diverted to Edinburgh, Scotland.

It was then that Flaherty decided to pull his phone apart and eat some of the electrical parts. After throwing the battery away, it began to smoulder, causing the crew to throw water on it.

On arrival in Edinburgh, Flaherty was met by police, where he racially abused one officer and threatened to find and kill his family.

The incident happened in January 2019, but he was only charged with the crime on Monday.

His defence lawyer blamed Flahety’s behaviour on a cocktail of pain medication for a trapped nerve and the alcohol.