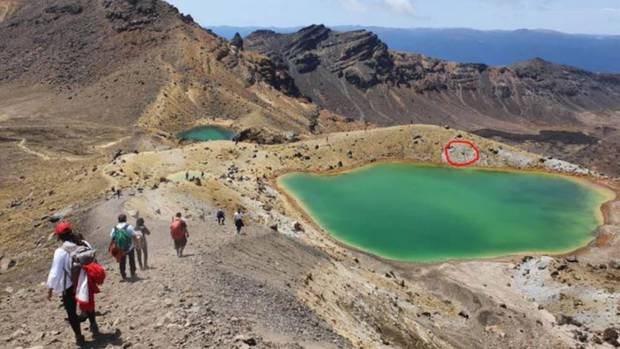 A hiker suffered second-degree burns after one of his legs fell through surface crust near a steam vent on the Tongariro Alpine Crossing.

The man had been hiking with his partner when they walked off a marked track and around the edge of the top of the famous Emerald Lake after seeing a steam vent nearby.

“They decided to get closer so they could take a photo,” a statement from the Department of Conservation said.

“About two metres from the top of the vent, one of the hiker’s legs dropped through the surface crust – causing burns up to his knee.”

The incident happened on Thursday, February 27.

The victim suffered second-degree burns and was airlifted by the Greenlea Rescue Helicopter service to Waikato Hospital.

The Department of Conservation says the incident was a “serious reminder” for hikers to stay on the marked track.

Senior public safety ranger, Theo Chapman, said: “There is geothermal activity around the Tongariro Alpine Crossing with a number of steam vents present – particularly around the popular Emerald Lakes area.”

Chapman said the steam vents should not be approached as the area was hot and the ground unstable.

“The track traverses an active volcanic landscape, there is always some risk from volcanic hazards.

“While DOC has substantial mitigation measures in place, visitors should make a personal choice if they are comfortable accepting the risk of hiking on an active volcano or choose a different track.”