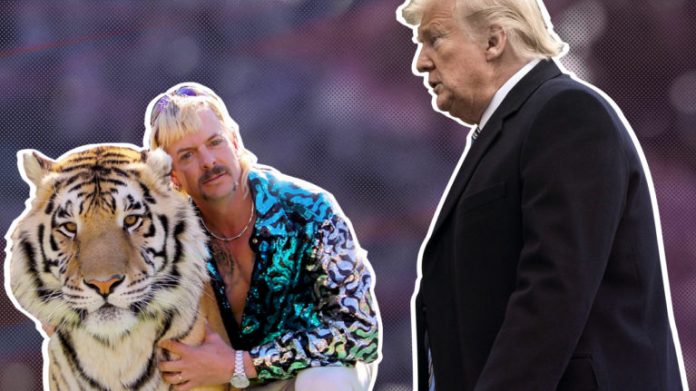 Donald Trump’s coronavirus press conferences have become such a bastion of misinformation and poor leadership that some networks have chosen not to even air the full things anymore. And just when you thought it couldn’t possibly get more frustratingly asinine, in walks New York Post reporter Steven Nelson. At today’s press meeting, Nelson decided it was important to know if the President of the United States was considering pardoning Joe Exotic from Tiger King:

A reporter just asked if Trump would pardon Joe Exotic from Tiger King and Trump said, “I will take a look.” pic.twitter.com/f0c0R8QmDy

Just as a reminder, or in case you havn’t seen Tiger King yet, Joe Exotic, the former GW Zoo operator was found guilty of attempting to hire a hitman to kill his nemesis, Carole Baskin, as well as eight counts of illegal wildlife trade and nine violations of the Endangered Species Act. Joe, meanwhile, holds he was set up and is suing the US government.

While it remains an odd thing to ask the leader of the free world, it’s not completely left field, Donald Trump Jr. recently joked about lobbying to pardon Joe Exotic, saying the docuseries star’s 22-year jail sentence was “too aggressive.”