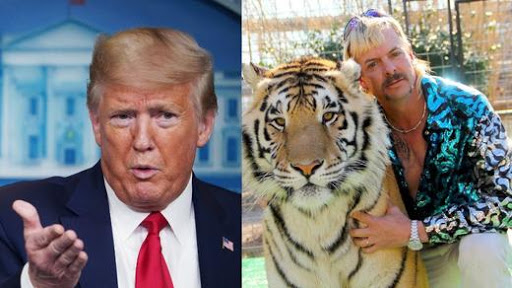 Joe Exotic, the subject of Netflix’s Tiger King, was sentenced to 22 years in prison, having been found guilty of trying to hire a hitman to kill Carole Baskin, his nemesis, as well 17 counts of (and this is a technical legal term) being a dick to animals. But Exotic has maintained his innocence, and his defense basically boils down to, “Would I have told everyone I would pay good money to have Carol Baskin killed if I was actually going to do it?”

Joe Exotic and his legal team are launching a campaign to ask Donald Trump for a pardon. The formal request will come in the next few days, TMZ reports, with the hope that he’ll be able to plead his case to the president.

So far, his strategy for presidential outreach involves wrapping a bus in an eye-catching decal that says “President Trump Please Pardon Joe Exotic.” TMZ suggests that there’s more to the plan, which will be revealed in the coming days.

Donald Trump, Jr. recently said he thought the 22-year sentence was “too aggressive,” and while Trump senior admitted to knowing “nothing about it,” he did say he’d “take a look” at a pardon. In the meantime Exotic is suing the US government for $94 million.