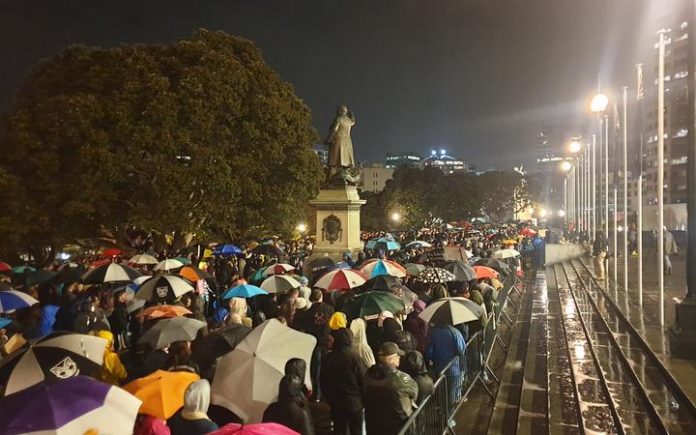 Riots erupted in the United States after days of protests in the name of George Floyd, an African American man who died after being handcuffed and pleading for air as a white police officer knelt on his neck.

The officer in question, Derek Chauvin​, has been charged with third-degree murder and manslaughter.

But New Zealand events on Monday were peaceful, despite several thousand people gathering in Auckland, and hundreds more in Christchurch, Dunedin and Wellington.

In one of the largest demonstrations seen in central Auckland in several years, protestors overflowed from Aotea Square into Queen St.

About 4.30pm, thousands of people arrived outside the American Consulate, took a knee and chanted “Are we next?” and “Black Lives Matter”.

But the gathering remained entirely peaceful, with just a few police officers stationed at one end.

Many protesters were not wearing masks, as recommended by Kiwi microbiologist Dr Siouxsie Wiles, who said people coming together in large numbers and shouting or singing were the perfect combination for allowing Covid-19 to spread.

Gatherings of more than 100 people are still banned on Monday.

On Twitter, Wiles encouraged people to minimise the risk by wearing a facemask and to not attend if they felt even slightly unwell.

People could also show solidarity by staying at home and donating to an organisation such as the Minnesota Freedom Fund, which pays bail for those who can’t afford it, or supporting New Zealand’s Arms Down movement, she said.