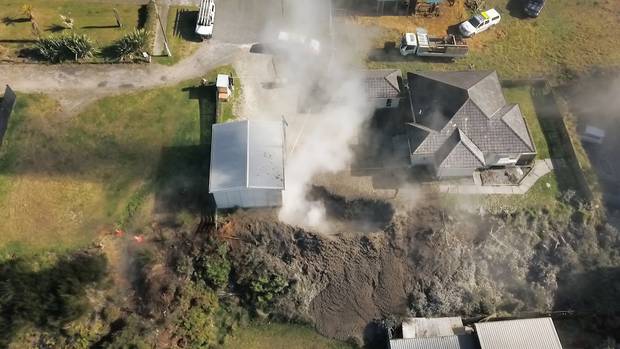 One year ago today, a mud pool opened in the garden of a young Rotorua family, forcing them to leave. Today, the house is empty, the mud pool is inactive but where is the young family now?

On June 25 last year Susan Gedye, woke up to her Whakarewarewa rental property shaking as a mud pool formed beside the house.

One year on she has settled into life at her father’s home, working from a cottage they built for the self-employed beautician.

“It made me look at life differently and when I think about it, it has made me realise how life can be so unpredictable and change in an instant,” she said.

The lessons she learned carried over as the family dealt with the Covid-19 pandemic.

The shaking started just after midnight on June 25 last year, and when it lasted for longer than two minutes Gedye got up to investigate and saw steaming mud coming out of the bank near the house.

Gedye had lived at the property for two years and in 2017 steam flowed out of the bank for about two weeks before stopping.

She phoned Rotorua Lakes Council about 1am and the council’s geothermal inspector Peter Brownbridge arrived to find steam and wet mud coming from a hole in the bank.

Council takes a “sit and wait” approach. Made with funding from NZ On Air.

The family stayed in the house for the rest of the night but when Gedye woke the next morning a team of GNS scientists and council staff were in her yard. Cracks had formed around the house and everything had taken on a lean.

Mud flew through the air, the bank had collapsed and an engineer advised the family to leave as a safety precaution.

The mud pool attracted the attention of the nation as concerns for the nearby shed grew as the mud pool expanded.

The house was issued a dangerous building notice and deemed uninhabitable in July.

Gedye and her now 2-year-old daughter moved in with her father in Owhata.

Her father had lost his wife, father and best friend all in the space of four months and Gedye said being with her father took the loneliness out of his home.

“Being able to be with him, have my daughter grow up around him is something that’s really special.”

Gedye was running a beauty business from the home and was forced to postpone bookings. For a while, she was working with clients out of her father’s lounge but they have since built a cottage in the back garden.

Her clients were “amazing,” some offered their home for her to work out of, others offered her a place to live.

The move meant the family could spend the Covid-19 lockdown together.

“It would’ve been really heartbreaking to not be able to see him.”

She has been to the old house a few times and still thinks back to the night it happened, “and how different it could’ve been”.

She said she was still in touch with the homeowners who had shown her nothing but sympathy throughout the experience.

GNS volcanologist Brad Scott told the Rotorua Daily Post the activity died down after a few weeks of the initial incident and was currently quiet.

Scott said the Whakarewarewa area had a long history of change and an increase in geothermal heat flow and activity had happened several times in the past and could happen again.

He said this mud pool was driven by steam flow.

The rising steam heats the shallow groundwater, making an acid solution which then turns the soil into clay and generates a mud pool.

Brownbridge said testing had continued frequently on site until the activity died off and staff now physically visit the site to monitor it about once a month.

• Extends from the lake shore in north Ohinemutu to Whakarewarewa in the south, and Ngapuna and Kuirau Park in the east and west.

• The thinner crust in the greater Rotorua-Taupo area, known as the Taupo Volcanic Zone is an area where, due to plate tectonic processes, a rift has formed.

• The crust in New Zealand is typically 10-15km thick, were as in the Taupo Volcanic Zone it is around 5-8km thick.

• The typical warning sign of geothermal activity is increased heat flow either in the form of hot water flows or steam.

• Usually the first indication is the dieback of trees and lawn.