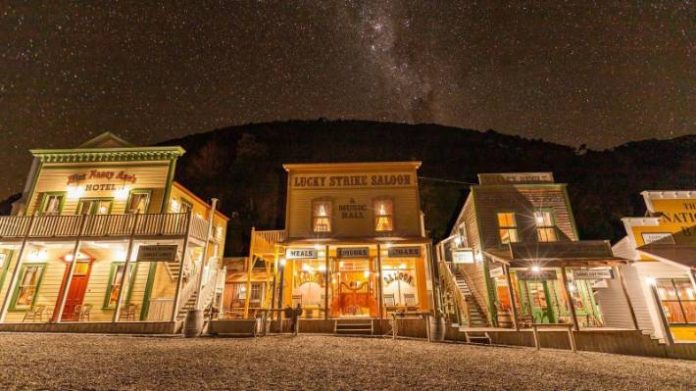 In 2012, Rob Bartley bought a detailed replica of an 1860s Wyoming frontier town, set in the heart of a 900-acre ranch on the Central Plateau, with a handshake deal.

The entire project, Mellonsfolly Ranch, had been built for a reported NZ$8 million by his friend John Bedogni, who founded a successful glass company. After Bedogni suffered a personal tragedy, his “interest fell away,” Bartley explains.

“That’s when I got involved.”

An entrepreneur who founded Ali Arc, an aluminium car parts manufacturer with facilities in New Zealand and Canada, Bartle will say only that he paid “a lot” for the ranch and town, which Bodogni built “for his friends and to have private events”.

Bartley has maintained the Old West town’s original mission, hosting an event every month or so.

“We’re quite selective about what we do and who we do it for, because it’s quite a special place.”

There have been weddings, corporate retreats, and family get-togethers.

“And we’ve had some fanatic cowboys who come back all the time.”

Set amid the rolling hills at the edge of the National Park in Raetihi, about an hour from ski-hub Ohakune, the ranch derives additional income from producing manuka honey.

In recent years, it has skyrocketed in popularity and price.

Last year, Bartley says, his ranch produced 15.5 tons of Manuka honey, which he sells in bulk.

“There’s a lot of money there,” he says.

“Especially with China coming back, now they’re paying big money for it.”

Successful as the ranch might be, Bartley says he’s dealing with health issues and has made the difficult decision to sell the entire operation.

“I’m certainly sad to be selling it,” he says.

“My family doesn’t really want to sell it, but we’ve got so many other business interests. I’ve got to make some decisions.”

He’s listed it for US$7.5m (NZ$11.7m) with New Zealand Sotheby’s International Realty (a spokesperson for Sotheby’s told Stuff the property was being marketed globally first, which is why it’s being offered in USD).

“We’ve already had interest from people in the States who want to invest in New Zealand, which would help them get residency,” he says.??

Bedogni, whom Bartley calls an “avid collector of many things,” constructed the town from 2002 to 2006 and filled it with material he and his wife had collected on trips to the US.

“Obviously, he is very much a cowboy enthusiast,” says Bartley, with some understatement.

“The whole town was drawn by him, and every inch of it is genuine.”

There are 10 “period” buildings, including a licensed saloon, a courthouse that doubles as a cinema, a sheriff’s office, a billiards lounge, a structure called Texas Rose’s Bathhouse, and 13 guest rooms that can accommodate a total of 22 people.

There’s also a three-bedroom home-built in period-appropriate architecture-used by the property manager, along with a large commercial barn for tools and machinery needed to keep the property up and running and two staff houses that can accommodate at least six people.

Not coincidentally, there’s a touch of HBO’s Westworld, minus the violence.

“On a typical weekend, people arrive-we encourage them to bring cowboy clothing, but we also have a costume department-and then we give them a town tour,” Bartley says.

“Next we strap holsters on everyone and give them a gun, and everyone grows about six inches when they put that gun on.”

The weapons do not have bullets, but gas canisters make shot-like sounds. There is a real shooting range nearby.

Typical activities include horse riding, clay pigeon shooting, archery, and walks in the bush; in the evening there’s music in the saloon and card games.

Bartley says the property also has a “big cannon, which we fire at nine at night.”

Sundays entail a big breakfast, a bit of lunch, and then “it’s back to civilization,” Bartley says, noting that the staff – usually about six people – sports costumes at all times.

“It’s not over the top. We should charge more.”

In the past three or four years manuka honey has become “like gold”.

“I’ve started our own honey business up there, so the land has become very valuable.”

Last year was a very good year, he says.

“You might have a bad year next.The season has to be right for the manuka to bloom, and when they bloom, you only have three weeks to harvest it.”

The honey is supplied by about 600 hives, Bartley says, which stay on the property from November through January; the bees are taken to the coast, where it’s warmer, during the winter months.

The ranch also produces clover honey, “but it doesn’t have the value of Manuka,” Bartley says.

The ranch is accessible by road, but there is also a helipad, is hooked up to the electric grid and has backup generators, as well as its own water tanks and a firefighting sprinkler system.

The ranch makes good money, Bartley says, making its primary appeal that of a business, rather than as a hospitality venue.

That, plus the appeal of residency status, makes his ranch a very appealing prospect to US buyers. An Investor 1 Residence Visa allows businesspeople who invest NZ$10 million over three years to apply – residency isn’t guaranteed.

“There are a lot of people right now thinking of getting out of the US. They’d have fun out here.”