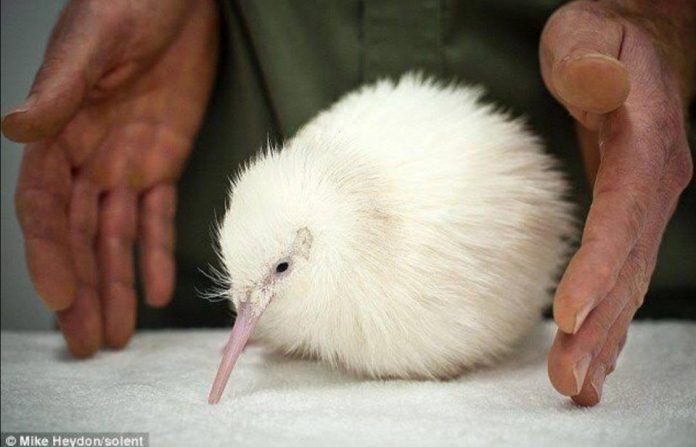 Manukura – The World’s Only White Kiwi

Manukura is a white kiwi bird – the only known white kiwi in the world! She was born at the National Wildlife Centre Pukaha, in the Wairarapa region of the North Island of New Zealand, on 1 May 2011.

Manukura is not albino (where there is a lack of melanin that makes pigmentation white and features pink eyes), but, pure white, which means she is the rare progeny of two parents who carry the recessive white feather gene. Manukura’s parents came from predator-free Little Barrier Island (700 kilometres, 435 miles north of Pukaha) along with 28 other kiwi in 2010 in the single largest translocation of kiwi known. The purpose of the translocation was to boost kiwi population at Pukaha. The result of that breeding season was 14 healthy chicks, most of which have now been released into our forest. Elders from the Rangitane o Wairarapa iwi (the local tribe) saw the chick as a tohu (sign) of new beginnings and gave her the name ‘Manukura’, which translated means “of chiefly status”.

At the National Wildlife Centre, kiwi eggs are collected at night when the male is off the egg and out feeding. They are brought into the kiwi nursery where they are incubated and hatched at around 80-90 days. The chicks are raised in captivity until they weigh 1.2 kg when they are released into the wild. Visitor numbers at the centre have soared since Manukura captured world-wide attention. “Manukura has certainly raised awareness of our work here to restore the forest and reintroduce native species. We need all the support we can get to maintain our intensive pest control programme which is funded mostly by community efforts.” – Kathy Houkamu.