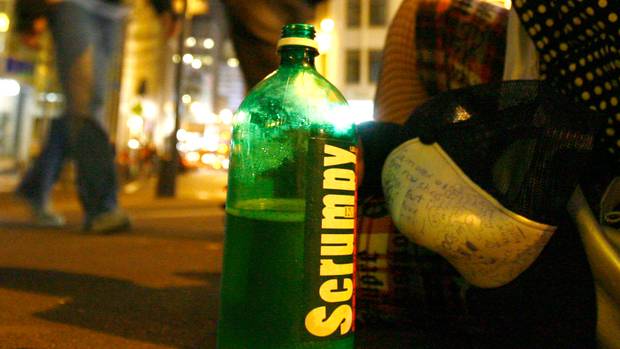 A Mataura woman who trashed an Oamaru liquor store on Sunday before returning to unleash a tirade of abuse at staff had drunk more than four litres of cider, police say.

Officers were called to the disorder incident at Super Liquor Oamaru in Thames St shortly before 5pm, after a report a woman had become aggressive when she was refused service because of her drunken state.

A police spokeswoman said the ”grossly intoxicated” 35-year-old allegedly threw an eftpos machine and launched signage around the store before she abruptly left, only to return a short time later to deliver a barrage of verbal abuse.

With her was a 39-year-old Oamaru woman, who a police spokeswoman said drove the younger woman to pick up more alcohol after the pair each downed three 1.5-litre bottles of scrumpy cider.

The driver was given a breath-screening test at the scene, which returned a breath-alcohol level of 867mcg.

She was charged with drink-driving, immediately disqualified from driving for 28 days and is scheduled to appear in the Oamaru District Court on July 15.

The 35-year-old was detained by police and later released with a formal warning for offensive behaviour, on the condition that she return straight to Mataura.