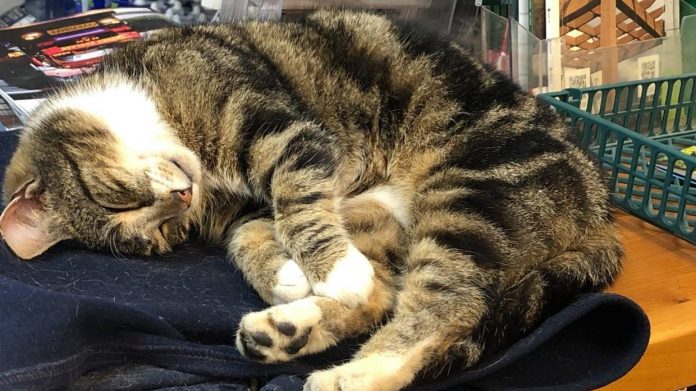 Rodney, the dumped hardware store cat, has been found alive and in good health.

The tabby has been found north-east of Marton by a rescue group more than a month since he was dumped in the wild.

A farmer called Central ITM, the hardware store the cat had called home for almost a decade, saying he had spotted a cat lurking around his barn after recognising him from a newspaper.

Marton Moggies founders Rebecca Stevenson​ and Bridie McCade​ were in disbelief when they heard the news.

“Instead of heading back towards town he was darting towards Whanganui.”

They set up traps around the barn on Tuesday and captured him within three hours, Stevenson said.

They took Rodney to Southern Rangitīkei Veterinary Services on Friday for a check-up, where he was microchipped and treated for worms and fleas.

Central ITM paid for the medical expenses, which were just over $250.

Although they were still waiting for the results of blood tests, Rodney appeared to be healthy and was happy to be back indoors, Stevenson said.

The cat’s favourite ITM worker visited him to make sure he was the right tabby and Rodney was “all over him”.

“He’s been well. He’s eating and drinking. He’s really happy inside and snuggling.”

Stevenson made sure Rodney was properly identified before announcing his return, after a false alarm a few weeks ago.

Rodney will stay with Marton Moggies for another two weeks before he is re-homed.

A lengthy list of hopeful owners has the charity up to its whiskers in potential families, but it will hold on to him until it finds the best fit.

A quiet, pet-free home without children is the type of retirement envisioned for Rodney.

The beloved counter cat had been dumped in the country in June by a store manager, who claimed the cat’s presence had become an insurance issue.

The manager was later stood down and the hardware store endured a backlash. Shoppers boycotted the store, while the SPCA investigated the dumping and search parties scoured the countryside near a reservoir where Rodney was “set free”.

Rodney the cat was often stationed at the ITM store checkouts, but in June he was dumped in the country after being deemed a nuisance.

McCade said there was a serious message to come from the saga.

Cats dumped in the wild had a knack for finding their way home, but as time passed Stevenson began to worry if Rodney would return.

“It was concerning for sure because it was over a month, but it was a happy ending.

“We’re just lucky [the farmer] read the paper that day.”

Cat rescuer Beverley Dowling​ never gave up hope, saying a psychic had predicted he was north-east of the town and making his way back to the store.

She, along with her team of volunteers, organised search parties and distributed 1200 flyers and 100 posters in their quest to find the missing feline, never giving up hope he would be found.

“He was born feral too, so that always stays in them a little bit. He’s a fighter.”