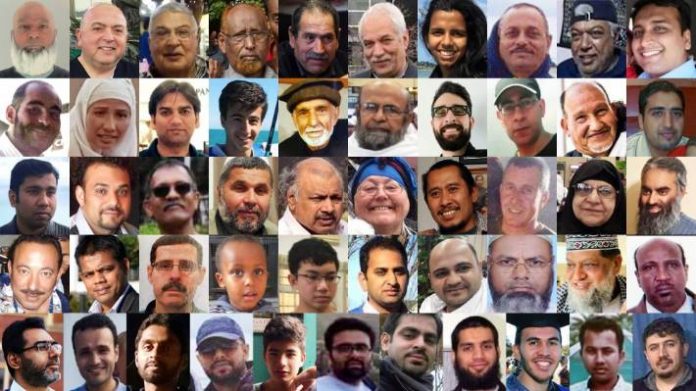 The gunman who shot and killed 51 people at two mosques in Christchurch on March 15 last year has been jailed for the rest of his natural life.

The terrorist, 29, was sentenced at the High Court in Christchurch on Thursday to life without the possibility of parole on 51 charges of murder, 40 charges of attempted murder and a charge of committing a terrorist act.

It is the first time this sentence has been handed down in New Zealand. The terrorist, through Crown-appointed counsel Pip Hall QC, did not oppose life without parole.

Justice Cameron Mander asked the gunman if he wished to address the court before sentence is imposed. “No, thank you,” he answered in an even and formal tone. He seemed sure of his answer and remained expressionless during his interaction with the judge.

On March 15, 2019, the gunman carried out mass shootings at the Masjid An-Nur (Al Noor) and Linwood mosques after spending months planning the attack. He bought military-style ballistic armour and tactical vests to enable him to carry numerous magazines, and wore this over military-style camouflage clothing.

He went to several rifle clubs and practised with different firearms. He modified the triggers of his military-style semi-automatics rifles to fire faster.

He planned his attack down to the finest details, timing his entry into the mosques when the maximum number of worshippers would be present, and anticipating the time needed to carry out the attacks and travel between the mosques.

Victim impact statements continued on day three of the mosque gunman’s sentencing at the High Court in Christchurch.

The terrorist planned to attack the Ashburton Mosque after leaving Linwood but was arrested on the way.

He initially pleaded not guilty to his crimes and was set to go to trial, but made a surprise turnaround in March entering guilty pleas to all charges.

Crown prosecutor Mark Zarifeh said the gunman was undoubtedly “New Zealand’s worst murderer”. The enormity of the offending was without comparison in New Zealand’s criminal history, he said, and undoubtedly the type of case envisaged when a law allowing criminals to be locked up for life was created in 2010.

The gunman had meticulously planned and prepared for his attack with the aim of executing as many people as possible, Zarifeh said.

“He caused permanent and irreparably damage to the victims, their families, the Muslim community and the whole of New Zealand,” he said.

Zarifeh said both a psychologist and psychiatrist reported the offender showed no remorse for his actions. In a recent interaction, the gunman claimed he did have remorse for what he had done, but the psychiatrist said the “depth of sincerity” of these claims was difficult to gauge and questionable.

A lack of willingness to rehabilitate, and the shooter’s narcissistic and misguided beliefs in his ability to self-diagnose and lack of insight to his offending, was proof of his significant risk of further offending.

There were no mitigating factors to be considered, Zarifeh said. The gunman’s guilty plea and his lack of previous convictions, were not enough to divert from a sentence of life imprisonment without parole.

Sentencing proceedings stretched over four days this week with 91 victim impact statements being presented to the court.

On Wednesday Hamimah Tuyan, the widow of Zekeriya Tuyan who was the 51st victim to die from injuries he sustained in the terror attack, spoke in court after travelling more than 8500 kilometres to see her husband’s killer sentenced. She urged the judge to never allow the terrorist the chance to be released from prison.

“He deserves a life of imprisonment until his last gasp, his last breath,” she said.