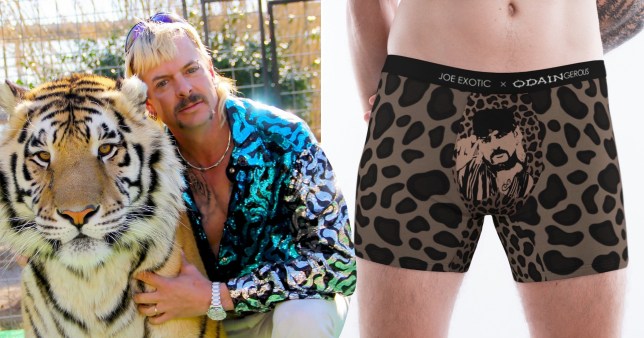 TIGER King star Joe Exotic has launched a cheeky new underwear line with his face emblazoned across the crotch of leopard-print boxers.

Dubbed the “Financially Recover Cheetah Boxer Brief”, the his ‘n hers versions keep “your unmentionables fashionably stylish and secure”, according to streetwear brand Odaingerous.

The Joe Exotic phenomenon keeps growing, with TMZ reporting that the Netflix star has expanded his online clothing range while behind bars.

Odaingerous’s website is advertising Exotic’s Cheetah Boxer Briefs for $24, while the women’s “cheeky brief underwear” is available for $21.

TMZ predicts that they are going to “sell like hotcakes … remember, his soft launch in May sold out in a matter of hours and raked in over $20,000 in online sales”.

Odaingerous has already sold out of black ‘Pardon Joe Exotic’ T-shirts, its ‘Fake Friends’ hoodie and joggers – boasting that it’s “fast become the go-to brand for the most exclusive, unique and custom outerwear amongst celebrities, socialites and fashion glitterati.”

The boxer briefs are “made from our super soft peachskin jersey in 92% polyester/8% spandex and lined with bamboo/rayon/spandex for comfort.

The women’s version is advertised as “artwork printed cheeky brief undies… both comfy and flattering”.

Both are part of the incarcerated star’s ‘Revenge’ collection, with Odaingerous also plugging its ‘Help Free Joe’ campaign.

It’s organised an online petition “because President Trump said he was willing to hear Joe’s case”.

The former Oklahoma zookeeper was sentenced to 22 years in prison for his role in a murder-for-hire plot, and for killing five tigers.

“Tiger King,” the true crime series set in the world of private zoos and their eccentric owners, became a worldwide phenomenon when it was aired in March.

It told the story of flamboyant Oklahoma zoo keeper Joe Exotic, his rivalry with Florida big cat rescue activist Carole Baskin and his imprisonment for hiring a hitman to try to kill her.

He was convicted of trying to hire someone to kill Baskin, who had tried to shut him down, accusing the zoo of abusing animals and selling big cat cubs.

Howard Stern has some advice for Ellen “Just be a prick”