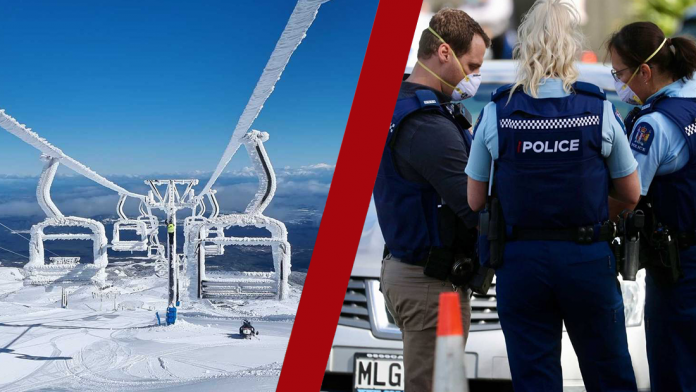 Three men from Auckland were arrested in Ohakune yesterday after travelling to Turoa Ski Field.

The trio were arrested after staff at the ski field became suspicious of documentation used to obtain a ski pass.

The three men travelled to Ohakune on Wednesday after using genuine essential worker passes to travel through the checkpoint in place south of Auckland.

Two of the men are aged 23 and the other is 18. They have been charged with failing to comply with a directions/restriction/prohibition (COVID 19) and take/obtain/use a document for pecuniary advantage.

The men who returned to Auckland yesterday evening have been bailed to appear in Auckland District Court on 23 September.

Police, the Whanganui District Health Board (WDHB), Ruapehu District Council and iwi are working closely together to ensure that the community is kept safe and that there is no risk from this incident.

Inspector Nigel Allan, the police area commander for Whanganui Ruapehu, said the behaviour of the three men was unacceptable from an iwi, community and Police perspective.

“We want to remind everyone that the restrictions in place are there to help keep everyone safe and reduce any spread of COVID-19 in the community.

As shown by the actions taken today where people choose to deliberately breach the restriction in place, Police will take enforcement action,” he said.

WDHB chief executive Russell Simpson said that the Public Health Centre had been following up on the case.

“We have tested the three people involved and all have tested negative. People can be reassured that there is no risk to the community from this breach,” he said.

“However, it is important that everyone follows the rules to protect the community from the Delta strain of the virus which is easily transmissible, spreads rapidly and is, therefore, particularly dangerous.”

Anyone with any cold, flu or COVID-like symptoms should call their doctor or Healthline on 0800 358 5453 and get advice about being tested.”

Local iwi Ngati Rangi and Uenuku noted that they found the actions of these men highly offensive.

“We are trying to keep our communities safe.  Now is not the time to go for a joy ride,” said Ngati Rangi Deputy Chair, Whetu Moataane.

Uenuku Chair, Aiden Gilbert added that if the alert levels are good enough for everyone else then stick to them.  “We are all in this together,” he said.

Ruapehu Mayor Don Cameron said that he wanted to thank the ski field staff for their vigilance, and the Police for their quick action in charging the people involved which sends a clear message to any others thinking of doing anything similar.

“It is very disappointing that a minority of people think it is OK to do something like this, but they should note that there are systems and processes in place that mean they are very likely to be found out and charged.

“We have no tolerance for people breaching the Alert Level rules and putting our communities at risk.”