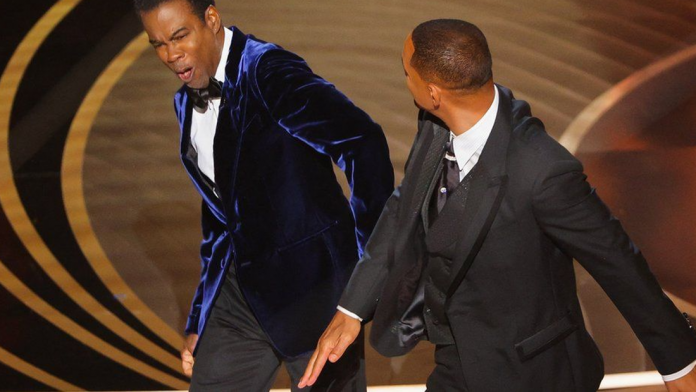 DRAMA has hit the Oscars

Actor Will Smith appeared to punch Chris Rock during the LIVE broadcast of the annual awards show after the comedian made a joke about his spouse Jada Pinkett-Smith.

Rock was presenting the Oscar for documentary feature and during his monologue made a joke about Smiths’ wife Jada Pinkett Smith being in “G.I. Jane” because of her shaved head.

Smith got up on stage following Rock’s gag and struck him across the face as the Fresh Price star believed Rock was joking about his wife’s alopecia. (A condition which causes hair loss)

Smith appeared genuinely angry as he returned to his seat telling the comedian twice to, “keep my wife’s name out of your f**king mouth”

Witness the UNCENSORED moment below.

Reports from Variety suggest that Smith’s publicist came to his table during the ad break to speak to him privately, as did his fellow actors Denzel Washington and Tyler Perry.

Following the moment in which Will Smith seemingly slapped Chris Rock at the #Oscars, Smith is comforted by Tyler Perry and Denzel Washington. He appears to wipe away tears before rejoining his wife pic.twitter.com/TyXPQe1WGY

Less than an hour after the incident Smith won the Oscar for Best Actor – Awarded to him for his role in King Richard. The first sentence of his acceptance speech referenced the scuffle with Rock. Smith said, “Richard Williams was a fierce defender of his family”.

Will Smith’s acceptance speech as he wins his first ever #Oscar pic.twitter.com/qKVTOb7V6Q

At the end of his acceptance speech, Smith joked saying he hoped the Academy would invite him back to the Oscars in the future.