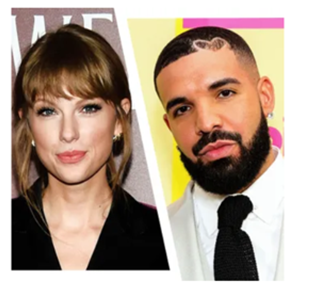 Heeeellooooo  👀  Something’s going on between the Tay Tay and Drake. He’s posted a photo on da ‘Gram of him giving her an awkward hug. (Celebrities, they’re just like us — except they all seem to know one another). The captions kinda weird… “They too soft to understand the meaning of hard work.”

Sure, Swift keeps a wide and varied circle — she has made much of her most recent work with a member of indie rock band the National — but this still seems like a bit of an odd coupling, aside from the fact that both she and Drake run the charts like few others these days. She has made her Drake fandom known before, name-checking the rapper on the Lover opener, “I Forgot That You Existed.” So is this the beginning of a Swiftian rollout for a new chart-topper? Or is Drake just flaunting that he met Swift, as any living, breathing human would? Here are a few theories the internet worked hard on.

Swift has new music with Drake.

Swift is rerecording an old song with Drake.

Drake is just really, really excited to be friends with Taylor Swift.
And we’re obvs all too soft to understand the hard work that went into that friendship!