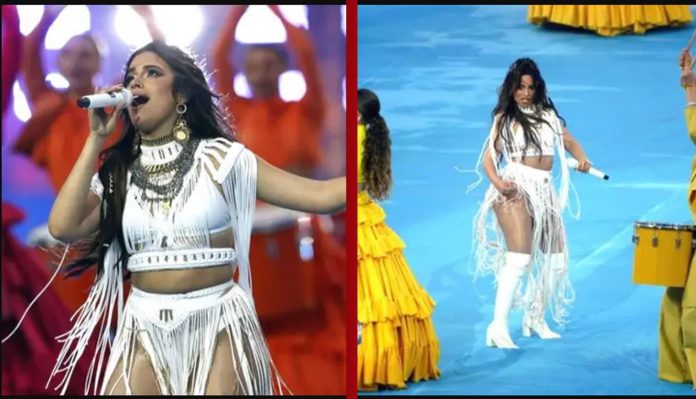 Here’s a reminder NOT to sing when Camila Cabello’s on stage!

She clapped back at football fans in a now-deleted tweet after they sang their teams’ anthems during her performance at the chaotic Champions League final in France – one of the biggest footballing events of the year.

Camila was the warm up act for the event an hour before kick-off and reports of security guards being ‘overwhelmed’ emerged, followed by footage of fans jumping the gates.

Eventually the game was delayed by 36 minutes as Liverpool fans struggled to get into the venue, and their frustration was taken out on Camila as supporters booed her opening ceremony performance. Ouch.

What didn’t help matters is that the UEFA still waited to bring Miss. Cabello out, meaning the match was delayed even further just so she could sing her songs.

“Don’t ever let anyone perform before a Champions League Finale ever again,” wrote one attendant on Twitter. “Thank f**k everyone mutually agreed in the stadium by booing Camila Cabello.”

But the singer has since called out the ‘rude’ fans for jeering at her and singing the Liverpool anthem over her songs.

In two now-deleted tweets captured by the online community, she said: “Playing back our performance and I can’t believe people were singing their teams’ anthems so loud during our performance. Like my team and I worked tirelessly for so long to bring the right vibes and give a good show.”

A few minutes later, she wrote: 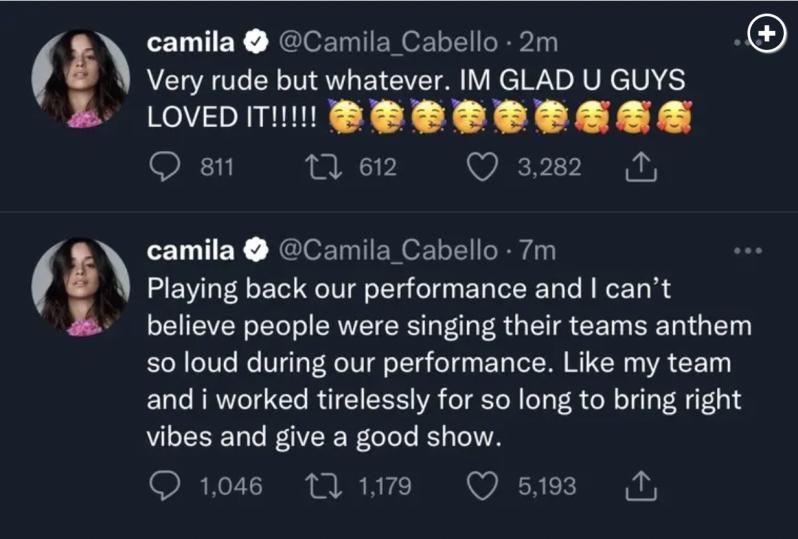 Many people pointed out that popstar performances are very much reminiscent of the Superbowl and not the kind of thing footy fans want to be seeing.

And you can bet plenty of people voiced this opinion online, with one writing: “@Camila_Cabello because people went to watch football not Superbowl. Yes I screened it before you deleted it.”

A second said: “I love Camila Cabello, but not before a Champions League final. Spare me this NFL style stuff.”

Even Richard Osman got involved by tweeting the following quip: “This is about as welcome as a game of 5-a-side would be before a Camila Cabello gig.” Ouch.

Camila Cabello drama aside, following their defeat to Real Madrid, Liverpool have since confirmed that they have officially requested a formal investigation into the incident last night after police carrying riot gear were filmed spraying tear gas at supporters who were forced to queue outside.

“We are hugely disappointed at the stadium entry issues and breakdown of the security perimeter that Liverpool fans faced this evening at Stade de France,” a statement read.

“This is the greatest match in European football and supporters should not have to experience the scenes we have witnessed tonight.

“We have officially requested a formal investigation into the causes of these unacceptable issues.”