Two children survived being thrown from the doomed Thunder River Rapids ride at Dreamworld and screamed in horror as their mothers were killed, it has emerged.

Initial investigations into the accident suggest that the raft collided with an empty vessel that had become stuck near the end of the ride.

The raft is believed to have flipped due to the collision, crushing and drowning two men, aged 35 and 38, and two women, aged 42 and 32, about 2.20pm yesterday on the Gold Coast, in Queensland.

The victims have been named as Kate Goodchild (nee Dorsett), 32, her brother Luke Dorsett, his partner Roozi Araghi and a 42-year-old woman who remains unknown.

Ms Goodchild’s daughter is understood to have been one of the children thrown to safety from the raft and screamed in horror as she watched her mother die, the Daily Telegraph reports.

The mother of the Dorsett siblings, Kim, took to Facebook to express her grief.

‘My family have been completely wiped out,’ she said.

‘I have three children and two of them are now gone. My eight-month-old granddaughter is never going to know her mother and that truly breaks my heart.’

Kim told the Courier Mail she is “absolutely devastated” following the accident that killed four people and left her grandchildren without their mother.

“I have three children and have lost two of them today – my whole family has been wiped out.

“I have two granddaughters – an 8-month-old and a 12-year-old – and it truly breaks my heart to know that my 8-month-old is never going to get to know her mum.”

The family were visiting Queensland from Canberra when they decided to visit Dreamworld. Kim Dorsett said her granddaughter was “distraught” at the loss of her mother.

The Ministry for Foreign Affairs and Trade said last night that there were “no indications” that New Zealanders were involved.

“The New Zealand Consulate in Sydney has also not been approached to provide consular assistance.”

The Herald understands the unnamed woman was originally from Auckland. The woman had been living in Australia with her Kiwi husband and their two children, who were on holiday on the Gold Coast at the time.

The four people killed in the horrific accident were just five seconds from safety when the craft flipped, giving them injuries “incompatible with life”.

Witnesses have told how they tried to comfort a young girl who was screaming as disaster shattered the funpark atmosphere.

“We tried to comfort her, but she was so emotional it was hard.”

“We were in tears ourselves and she was just hysterical.”

A former Dreamworld staffer who has worked at the park for more than a decade told the Gold Coast Bulletin the six-seater raft had nearly finished the ride when it hit an empty raft ahead and flipped.

“If you ever saw a doughnut being made at Donut King, they have a conveyor belt at the end that the doughnuts go up to dry off,” he said.

“It’s exactly the same thing. It just takes them from the water in the bottom to the unloading point at the end.”

Witnesses who rode the ride earlier in the day expressed concern about the Velcro seatbelt that was holding them in. Melbourne father Jesse Lovett said he did not feel secure holding his 2-year-old daughter on his lap.

“It’s so rough and you had to hold it really tight,” he said. “It was my favourite ride and now with my daughter I was pretty scared to go on it.”

“All that was holding her in securely was me. The strap did nothing and easily came undone because it was wet.”

Police are combing CCTV footage for clues as to what led the ride to “malfunction” and cause the horror crash on the Thunder River Rapids ride about 2:20pm Queensland time yesterday.

Gavin Fuller of Queensland Ambulance said two victims were “ejected” after a “malfunction” on the ride. Park staff were trying to help them when paramedics arrived – but Fuller said their injuries were so severe they were “incompatible with life”.

Chaplains visited the park to offer support and others have left tributes at the scene.

Witnesses told of their horror at seeing a young girl crying who they believe is the daughter of one of the victims.

“We saw people hysterically crying, running around. One of the daughters said it was her family,” a witness told Sky News.

Lia Capes said: “We saw [a] little girl and we believe it was her mum because it was just her and her little sister that was an infant.

“We tried to comfort her to the side to distract her.”

She also said: “I was speaking to one of the guys and he said it was the raft or the boat thing in front of him, the whole thing flipped and everyone was screaming.”

A witness said “there were kids onboard screaming while their mum was trapped under”. Another woman said a woman was “crushed” by the ride and left “hanging by her foot”.

The accident has prompted intense speculation about whether or not the ride was performing well. Witnesses told Nine News they were forced to wait earlier in the day while water was drained and engineers looked at it, but Queensland Police denied knowledge of any prior incidents.

“They drained all the water out and then had to refill it back up, and then we were allowed to go.

“But, yeah, we were stuck there for about 30-40 minutes at least,” one woman told Nine.

Jesse Lovett said he rode the ride earlier with his 2-year-old daughter on his lap and was concerned about the Velcro strap which was ineffective, he claimed.

Dreamworld CEO Craig Davidson said: “We are deeply shocked and saddened by this. Our hearts and thoughts go out to the families involved and their loved ones.” 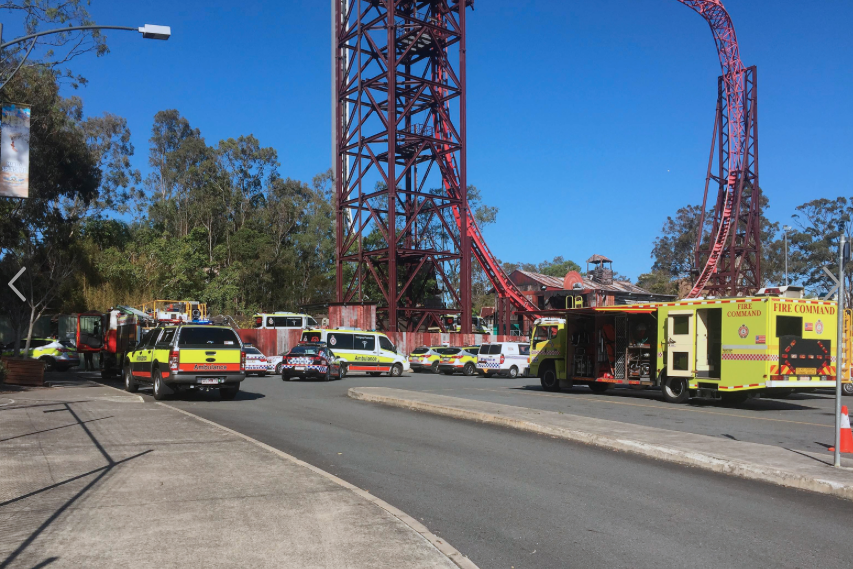 The company also issued a statement saying it was working with police to establish the facts.

“Dreamworld’s focus and priority is with the families of those involved in this tragedy and will be providing an update to the public as soon as information becomes available.”

The park will remain closed today.

It’s the second time this year the park has been forced to close because of safety concerns over a ride. In April it was shut down for a weekend after a man nearly drowned on a similar ride. Worksafe Queensland allowed it to reopen after an investigation.

A Queensland Workplace Health and Safety spokesman said preliminary reports it may have been an industrial accident on a ride undergoing repair were false.

“The early indications we have is that the ride was operating at the time,” he said.

Fans of the park have taken to social media to vent fears about ageing equipment and operational issues.

Facebook user Tasneem Seedat gave the popular park a two-star review on Monday, saying rides are “out of date and are not as smooth as they should be”.

“I injured myself on the way down from the Giant Drop because of your old-school repairs and upgrades. Wipeout and a few others need replacing. It just needs a general update all together. All rides are out of date,” she wrote.

“Another major concern is that for all of your rides there is only 1 or at max 2 people operating it and checking harnesses.”

Kiwi one of four dead in accident at Dreamworld

A Kiwi woman was one of four people killed in a horror accident on a Gold Coast theme park ride.

The Herald understands the woman and one of her children were on the Thunder River Rapids ride at Dreamworld when the accident happened about 2.20pm local time (5.20pm NZT).

Originally from Auckland, the woman had been living in Australia with her Kiwi husband and their two children, who were on holiday on the Gold Coast at the time. Their son, who was also on the ride is said to be recovering in hospital, his father by his bedside.

Shocked relatives in New Zealand were preparing to rush to the Gold Coast to support the family.

• September 12, 2014 – Eight-year-old Adelene Leong dies after being thrown from a high-speed ride at the Royal Adelaide Show.

• May 18, 2013 – Five-year-old boy seriously injured after being flung from the Frizbee ride at a school fete in Highfields, Queensland.

• March 11, 2001 – Eight-year-old girl dies and 11 people injured when an inflatable carriage breaks free from a ride at a carnival in Kapunda, South Australia.

• Sept 2, 2000 – Thirty-seven people hurt when the Spin Dragon ride collapses and drops a 4.3 tonne gondola onto queuing riders at the Royal Adelaide Show.

• Feb. 22, 1997 – Eleven-year-old girl dies and two boys injured when a carriage on the Octopus ride breaks free and falls to the ground at the Rylstone Show near Mudgee, NSW.

• June 9, 1979 – Six children and one adult die when Sydney’s Luna Park’s Ghost Train catches fire. This occurred two months after 13 people were injured on the Big Dipper when a steel runner came loose on a rollercoaster train on April 16.

• October 24 1968 – High-wire stuntman Adrian Labans, 44, falls to his death during a highwire act at the Royal Hobart Show.