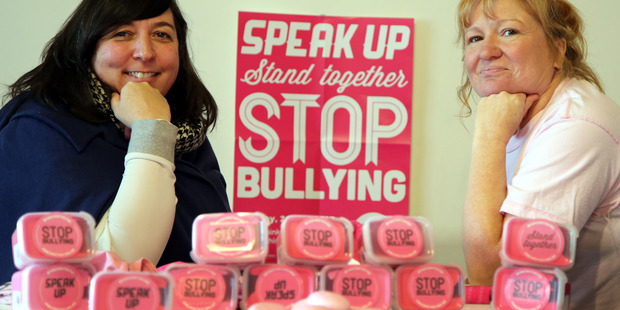 The anti-bullying message of Pink Shirt Day will be spread out into every corner of Wanganui this Friday.

And you can be part of it!

Wanganui resident Sandie Roach has organised a rock-painting session on Friday at the Wanganui Women’s Network. BYO rock, or take one of Ms Roach’s, and paint it pink, then release it “into the wild”.

Ms Roach, who is a campaigner against violence and bullying, is also a keen participant in Wanganui Rocks. Wanganui Rocks, which took Wanganui by storm last summer, involves people painting rocks and releasing them into the wild for people to find and re-hide.

“I had an idea to paint some rocks for Pink Shirt Day, so I mentioned it about a month ago on the Wanganui Rocks Facebook page, and it got a really good response.”

“I thought rock painting was a great way of promoting this cause – people just love the painted rocks. And it’s a good chance to talk about bullying with people,” she said.

Carla Donson at the Whanganui Women’s Network provided a venue for the rock painting, and Mitre 10 Mega have provided pink paint for people to use.

Pink Shirt Day is an annual global event that began in Canada in 2007 when two students took a stand against homophobic bullying after a classmate was bullied for wearing a pink shirt.

Rock painting will be held at the Whanganui Women’s Network, St Hill St, between 12 noon and 2pm on Friday.