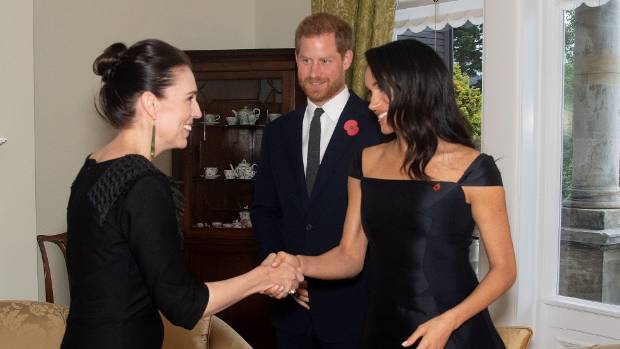 Meghan and Prince Harry touched down in Wellington on Sunday for their four-day tour of the New Zealand. If you follow the hashtag #RoyalVisitNZ you’ll see just how excited Kiwis are about this visit.

There was a lot of hype in the capital for their arrival, royal enthusiasts waiting for hours just to catch a glimpse of them at the Pukeahu National War Memorial.

At a reception at Government House, hosted by Governor-General Dame Patsy Reddy, Meghan Markle said the country was universally praised for fighting for the rights of women. She was also praised by her use of Te Reo in her speech as she greeted the audience with “good evening – tena koutou katoa.” Overall Markle’s speech was about the 125th anniversary to woman’s suffrage in New Zealand and how important Feminism is.

There was a bit of a debacle where the royals are staying when supposedly a steamer set off the fire alarm. Fire and Emergency said they had arrived at Government House in response to an alarm after receiving a call about 6.45pm. Staff were briefly evacuated, although it’s not clear if the royals were. The alarm went off just before leader of the National Party Simon Bridges and his wife Natalie were due to meet the couple.

All in all we are loving their visit so far, we can’t wait to see what else Prince Harry and Meghan get up to!