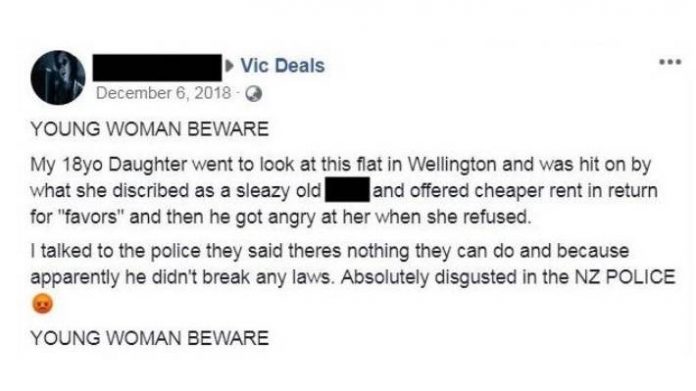 A Wellington student’s mother has spoken out about a landlord offering sex-for-rent arrangements in the Capital.

She posted the warning on public Facebook page ‘Vic Deals’ in December, saying her 18-year-old daughter had been “offered cheaper rent in return for ‘favours'” by the “sleazy” landlord at a viewing of a flat she’d found on TradeMe.

A Stuff investigation into Craigslist’s sex-for-rent market shone light on some of its New Zealand-based landlords, including one in Auckland called Tyler. Tyler has since tweaked his advertisement on the US-based website to say students and travellers “get priority as I admire brains and wisdom (with a little bit of arrogance)”.

It states he is “open to a wide array of arrangements” for payment.

When Stuff went undercover as a potential flatmate to speak with him, Tyler described how sex acts ranging from voyeurism to the sado-masochishistic would get flatmates various reductions in rent. He said women could live with him for free if they performed oral sex on him every second day. 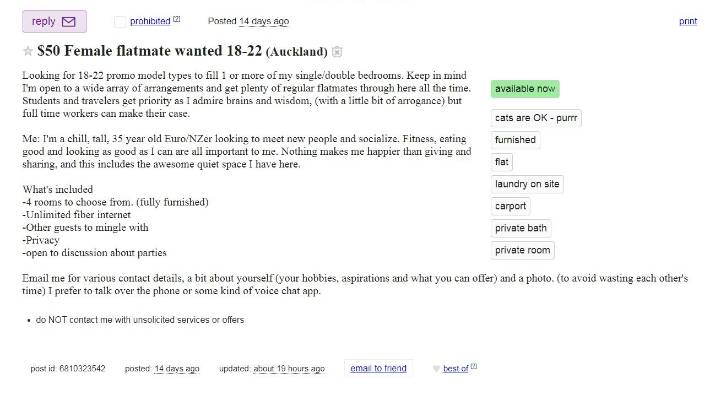 Registered psychologist Kathryn McPhillips said Tyler’s behaviour showed he struggled to handle frustration and rejection – which could put women choosing to live with him at risk.

McPhillips is the executive director for sexual assault hotline HELP. She said women feeling misled and harmed by derailed sex-for-rent deals did contact HELP on occasion, but that such derailings “would be very under-reported” due to victims blaming themselves for entering the situations in the first place.

Will Matthews, former president of the Auckland University Students’ Association (AUSA), said “there were always rumours” of students winding up in sex-for-rent situations.

There have been seven different ads for free or reduced rate rooms in Auckland and Christchurch up on Craigslist over the past week.