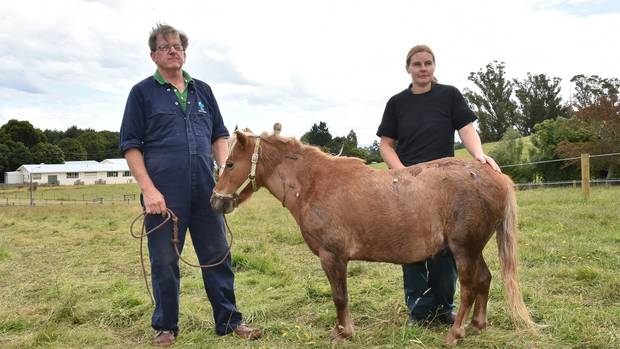 Star, a 10-year-old calf-sized horse, was tethered in his usual paddock in the small seaside settlement near Dunedin about midnight on Sunday.

His owner said her friend was walking a dog near Star’s corner paddock at the intersection of Brown St and Pitt St, when he heard a whinnying from nearby.

He went to investigate and discovered Star was no longer tethered, and a trail of blood led down the road.

Following the gruesome trail, the owner said he found the “little-bloodied horse” still alive a short distance down the road.

The man went to alert the owner, and together they managed to get Star into a float and transport him to the Otago Equine Hospital in Mosgiel.

Despite a five-hour operation stitching the pony’s 41 wounds all over its neck and back, 10 year old Star has passed away.

The owner said she was shocked and frightened to discover someone would attack her beloved miniature horse.

“He’s tiny, he’s cute, he’s about the size of a calf, and some [person] just went to town stabbing him.”

Nearly $3000 has been raised on Givealittle to help Star’s owner with the vet bill. It can be found here.