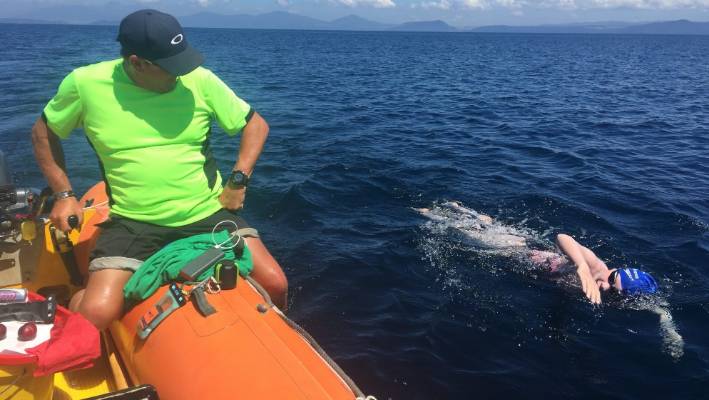 14-year-old Aucklander Caitlin O’Reilly is the youngest female to swim the lake’s 40.2 km length – a distance longer than the English Channel [33.8 km].

Caitlin left the lake’s southern end at Waihi at 4am on Thursday.

“Leaving the shore was the hardest part.  But I figured out why I was doing it in my head.”

“Then I just put my head down and got on with it.”

As per International Marathon Swimming rules, Caitlin did not wear a wetsuit and was not allowed to rest on her support boat.

Caitlin reached the Taupō Yacht Club at the lake’s northern end after 13 hours and 26 minutes.

“I’m proud of myself and I’m happy I completed it. But I’m so sore, and tired,” she said.

Caitlin is no stranger to long swims. In 2017, aged 12, she swam across the Cook Strait.  The 26-km journey took her 7 hours and 19 minutes and made her the youngest female and youngest New Zealander to complete it.

The Carmel College student said she planned to complete the Ocean 7, having already knocked the Cook Strait off.

The marathon swimming challenge consists of the following seven open water channel swims:  the North Channel between Scotland and Ireland, the Cook Strait, the Molokai Channel in Hawaii, the English Channel, the Catalina Channel in California, the Tsugaru Strait in Japan and the Strait of Gibraltar between Spain and the African continent.

Caitlin plans to cross the English Channel next summer, but will be racing in the pool in the meantime.