A series of short videos in Taupō showed a young man tormenting a tiny bird, holding it up by one of its feet and throwing it into a box. He also pushes the bird around with a hockey stick and blows smoke into its face.

At one point he can be seen putting the bird in the oven and closing the door, although he is later seen taking it out again apparently unharmed.

A young Taupō woman who wants to remain anonymous says she watched the videos on an acquaintance’s Snapchat story on Sunday.

After she reposted the distressing footage to raise awareness of the abuse, she says her Snapchat “blew up” and she received countless responses from other young people in the community who were similarly outraged.

She doesn’t know what happened to the bird, but a screenshot of a friend’s conversation with the alleged culprit indicates they took it back to where they found it. 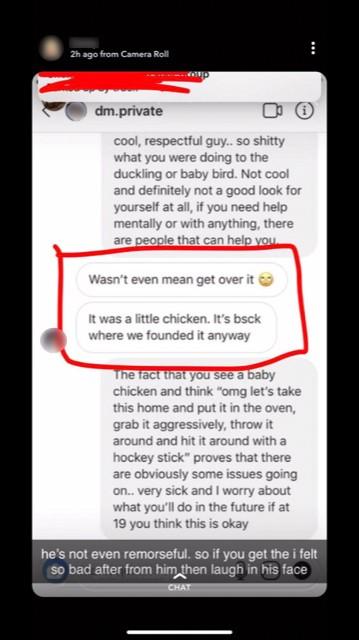 She provided the SPCA with the videos as well as the names and details of those involved, and has been told they’re investigating the case. Newshub has approached the SPCA for confirmation.

The young woman hopes the culprits are held accountable, whether that means legal consequences or not.

“I hope this is a wake-up call not just for him, but for everyone. He’s a bad person but even this is so low for him. It’s really not okay.”