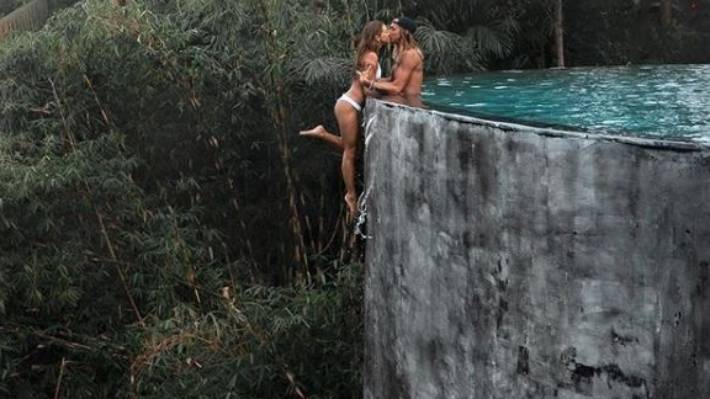 Kelly Castille and Kody Workman run the account @positravelty, where they frequently post breathtaking photos from their travels.

However, one recent photo caught more attention than usual among their 60,000 followers.

The photo, taken in Bali, featured Castille, 33, dangling over the edge of an infinity pool, held up by Workman, 32, while they kissed.

Instagram users branded the picture “stupid”, “terrifying”, “so dangerous”, and “so crazy”.

But Castille, from Louisiana, and Workman, from Michigan, insisted that they made sure she was safe.

“What is probably most surprising to any audience is that this photo was actually Kelly’s idea,” Workman told Business Insider.

“We are both in good shape, we know our bodies, and, in turn, we know our limits,” he said. “We had faith in each other and trust to pull this off, and so we made the choice as a team to shoot it.”

He added: “There is a lip where the ridge of the infinity pool juts out over the wall, where Kelly could get a solid grip and place her weight on her forearms. I held her the entire time, and, if zoomed, you can actually see my grip on her arm.

The duo said they weren’t scared at all and felt “very safe”.

Lets be real also, it made for a good insta pic! #TravelGoals