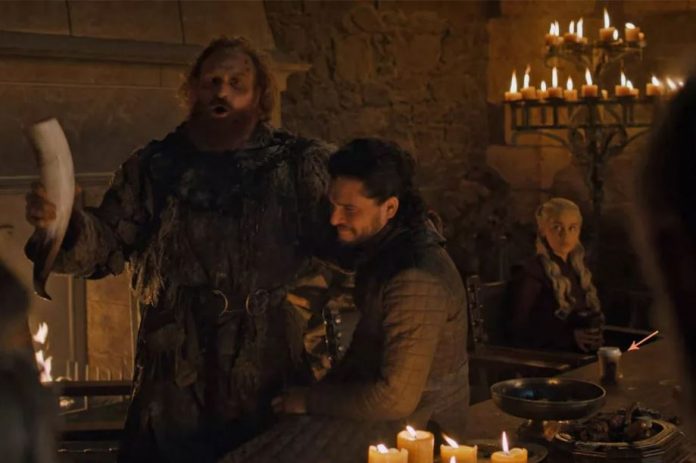 Game of Thrones, the most closely watched and scrutinized show on TV, last night aired a huge moment of lore discontinuity, as a celebratory feast in Winterfell happened to include a distinctly modern takeaway coffee cup among all the metal goblets of wine.

It’s not obvious who the offending coffee drinker on set was, or what flavor of Starbucks brew they enjoy, but the position of the cup was on the grand table of the nobles, in front of Jon Snow’s seat.

It’s also not clear whether this was a mistake — which would require all the actors and producers, plus all the editors afterward, to not notice — or some deliberate tongue-in-cheek insertion to get people riled up and talking about the show even more.

The twitterverse as you can imagine, is already jumping onto making memes:

Daenerys Stormborn of House Targaryen, the First of Her Name, Queen of the Andals and the First Men, Protector of the Seven Kingdoms, the Mother of Dragons, the Khaleesi of the Great Grass Sea, the Unburnt, the Breaker of Chains, and Drinker of Pumpkin Spice pic.twitter.com/BOPdolRhXz

1. After last week's #GameOfThrones, the cinematographer had to fight off criticism that it was too dark and people couldn't see.

2. So this week he inserts an offending Starbucks cup into dark scene.