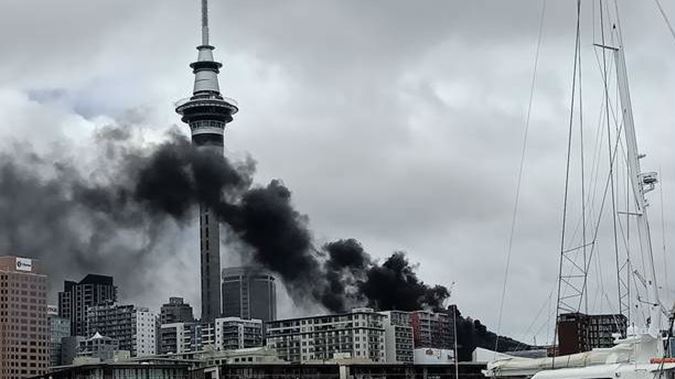 The massive blaze has continued to burn since it started yesterday afternoon – despite firefighters using 12 million litres of water fighting the fire.

Massive flames and black smoke continue to pour from the site with more than 80 ground-based firefighters using high-powered hoses to try to quell flames.

Fletcher Building CEO Ross Taylor told reporters today that the fire started where blowtorches were being used on bitumen to seal roof joints. The company remained committed to completing the $700m convention centre.

Fletcher Building later clarified that there were active alarm systems on all completed floors of the centre.

“It was on the floors still under construction where there were only manual alarm systems,” a spokeswoman said.

The fire – ignited by a worker’s blowtorch on the roof of the seven-storey building about 1.15pm yesterday – shows little sign of abating. Flames and thick smoke continue to pour from the building. Fire crews last night sacrificed the roof of the Convention Centre to try to save the $700 million building.

Thick toxic smoke is still billowing across the CBD.

SkyCity casino and the Sky Tower have been evacuated and are closed until further notice. SkyCity hopes to be able to reopen its hotels and restaurants by lunchtime on Wednesday.