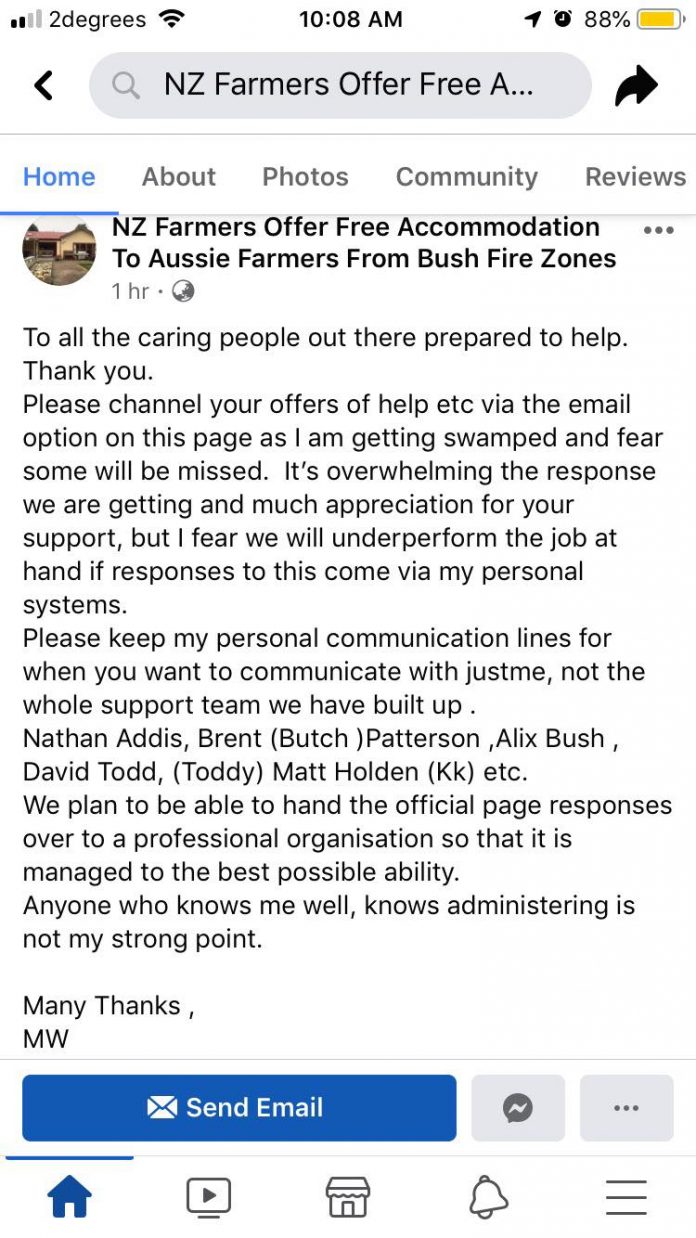 A couple of Hawke’s Bay locals are behind an initiative to help Australian farming families affected by devastating fires raging across the country.

Nathan Addis , who grew up in Waipawa, and Mark Warren , who farms in Central Hawke’s Bay, have been rallying New Zealand farmers to lend their shearing sheds, guest houses and Airbnbs to their Australian counterparts.

Addis said the idea came from Warren and another farmer down in CHB, Greg Hart .

“Greg’s got a lodge there, and they were talking and he said it would be really good to do something for these guys in Aussie.

“And Mark said, well I’ve got a bloody empty house as well.

“And so the idea was born.”

Addis said they had put feelers out to see whether it would be possible, thinking the Facebook Page, appropriately titled NZ Farmers Offer Free Accommodation To Aussie Farmers From Bush Fire Zones, may get 80-100 likes and they would get maybe five offers for accommodation.

Instead, support came pouring in.

By Sunday afternoon the page had more than 4000 likes, and they had at least 500 offers for accommodation, from Invercargill to Northland.

“The Facebook Page went live, just before 10 O’clock on Thursday night, and the morning after we already had 10 offers of houses via people messaging the page and then we had another eight via email, and it’s just gone mental from there.”

He said he had one person offer up their motel, and a South Island station had said they could accommodate around 30 people.

As well as rural communities, people in New Zealand’s cities have also been offering accommodation.

In total, he imagined enough offers had come through to house more than 1000 people.

While the idea had started specifically to support Australia’s rural community, Addis said they were receiving offers from people saying they were happy to accommodate firefighters once the fires were under control.

Others who did not have accommodation had offered help with transportation, be it in rental cars or a bus to carry people from the airport in Christchurch to the West Coast.

Someone in Australia had been in touch, offering to help organise passports and plane tickets.

“It’s gone from snowflake to avalanche in a hurry.”

“I saw the idea take shape on Facebook, and then saw it begin to take off.

“I’m very, very proud of Mark and Nathan because a lot of people talk about how terrible it is in Australia and wanting to help, but these guys have actually created action.”

She said rural people understand how life-changing an event like the fires can be.

“Rural people all around the country are obviously getting in behind the this.”

Click here to help out or to find out more.