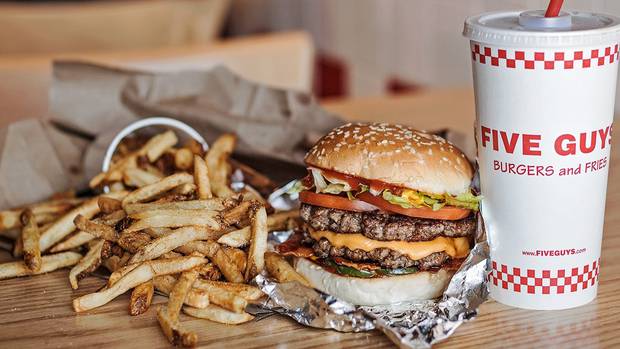 The franchise – renowned for its made-to-order burgers with 15 different toppings and American-style milkshakes – is expected to open in 2021.

Seagrass Boutique Hospitality, the group behind restaurants The Meat & Wine Co, Ribs & Burgers, Italian Street and Kitchen and Hunter Barrel, confirmed the chain would be coming to locations around New Zealand and Australia.

“We are looking to open our first store in early 2021,” the company said in a statement.

Five Guys has more than 1500 locations worldwide and counts the UK and Hong Kong as its major successes outside the US.

Initial sites are now being scouted in Sydney, with the first restaurants expected to open by the middle of next year.

It is not yet known where Five Guys plan to open stores in New Zealand.

Melbourne and Brisbane will also be one of the first locations to open across Australia.

Five Guys was founded in 1986 in Arlington County, Virginia, by Janie and Jerry Murrell and their sons Jim, Matt, Chad and Ben.