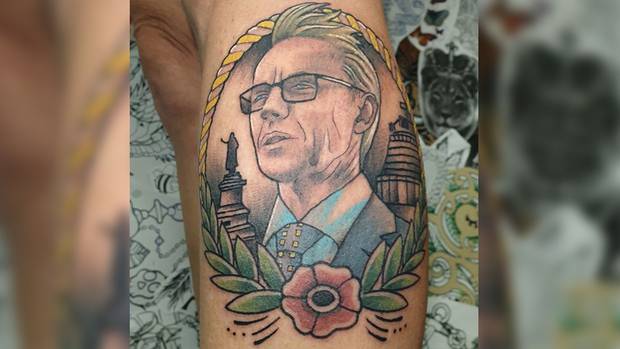 He won the love of New Zealanders around the country and made many hearts swoon.

Now Dr Ashley Bloomfield has been immortalised in ink after a Kiwi woman decided to pay homage to the director general of Health.

Morrinsville’s Dave Mouat, an international award-winning tattoo artist, was contacted by local woman Sherilyn about designing a piece of art that showed off both Bloomfield and elements of New Zealand.

The completed tattoo has since been posted to social media and left users blown away at the detail.

An Anzac poppy is featured underneath. The Beehive and the statue of former Prime Minister Richard Seddon are seen in the background.

“It took about four hours to design and tattoo,” Mouat said.

“I just had a look through [photos of Bloomfield] and liked the one with the hair flowing in the wind.

Sherilyn’s tattoo was inked on her calf muscle.

Mouat said it was the first Covid-related tattoo he’s done, but wasn’t surprised when Sherilyn came in with the idea.

“I know with Sherilyn she’s fun and most of her tattoos reflect her quirky sense of humour.

“She spent lockdown by herself so she went a little stir crazy and Ashley became her highlight of the day.

“The Man, The Myth, The New Zealand Legend – Dr Ashley Bloomfield. This will go down as definitely one of the most memorable tattoos that I have done.”