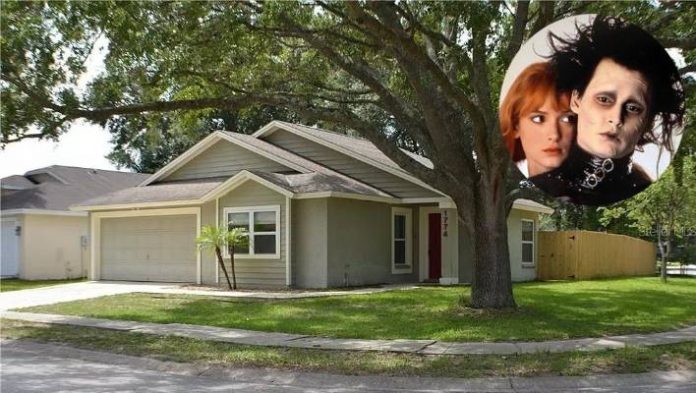 The pastel-coloured, cookie-cutter house in Florida that became Johnny Depp’s home in the beloved 1990’s satire Edward Scissorhands is for sale.

Things have changed in Lutz since Hollywood rolled into town 30 years ago.

The streets that once epitomised a strange, sun-parched, suburban nightmare are now threaded with tree-lined avenues and dotted with modest bungalows in muted, natural shades.

Inside, the layout is much the same as it appeared in the movie, although the decor has been slightly updated and the floors redone.

One feature from the film is still there: the sliding patio doors.

These doors are where Edward’s paramour Kim (Winona Ryder) first glimpses the snow that his ice carving creates in the backyard in a scene that fans consider the romantic heart of the classic Tim Burton horror-satire-rom-com.

About five years ago, a Lutz local spent some time tooling round the neighbourhood matching scenes from the film with how the locations look today.

The comparison shots show just how much the once quite exposed neighbourhood had changed, becoming a leafy green space, with lots of shade and mature trees.

In his fictional town, the monster doesn’t live in the haunted mansion on the hill; what lurks behind the wide smiles, manicured lawns and candy coloured homes of suburban USA is far more insidious than a teenager in bondage gear with scissors for hands.

The film cemented a young Johnny Depp’s movie-star status and launched a long-time collaboration with Burton. He would go on to star in eight of Burton’s stylised horror-comedies.

Depp and Ryder, who were engaged for several years in the 90s, had a reunion of sorts in July when the actress testified on his behalf in Depp’s libel suit against British tabloid The Sun for calling him a wife beater.

Called on to characterise their relationship, Ryder told the court in a written statement that Depp was “never violent to me”.

“I was shocked, confused and upset when I heard the accusations,“ she wrote.

“He has never been violent or abusive towards anybody I have seen.”

The house, built in 1989 shortly before filming, is part of the Carpenters Road community, which includes a community club facility. It is listed as “ready for you to move in”.

“This home and area is great for someone just starting out, or ready to settle into their forever home,” the listing reads.

A snip for any movie fan.