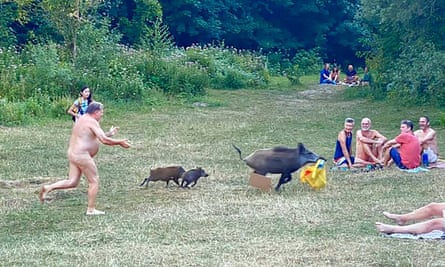 Berliners attempting to cool off at one of the city’s lakes this week were treated to the spectacle of a portly naked man giving chase to a pig.

The gentleman in question was indulging in the time-honoured German pastime of nude bathing when a wild boar emerged from the surrounding forest, snatched his bag and made off with it.

The nudist immediately set off in hot and sweaty pursuit. And in the age of Twitter and Instagram, there were witnesses on hand to capture his quivering flesh on camera and post the resulting pictures online.

The bag, it appears, contained not only his clothing but also his laptop. It is not clear which he was most concerned about, but to general relief he was able to recover both from the clutches of the boar.

The incident took place on Wednesday evening at Teufelsee, or the Devil’s Lake, a popular bathing spot in Berlin’s Grunewald forest.

Adele Landauer, a personal coach, who shared the photos, revealed that the beast had first pilfered some pizza before snatching his hi-tech prize.

“Nature strikes back!” Landauer wrote on Facebook, saying that the man “gave it his all” in trying to retrieve the computer.

She said onlookers “adored him how focused he stayed and when he came back with his yellow bag in the hand we all clapped and congratulated him for his success”.

The forest is known for its wild boar, which sometimes roam into the city streets in search of food.

A 60-year-old woman who was also swimming at the time told Bild newspaper an entire family of boar visited the lake at the time of the incident.

The hot-footed nudist has not been named.

Gonçalo Trindade, a Twitter user who shared the images online, had a take on why the man was nude.

“He was naked cause, well, Germans,” Trindade tweeted.

There are many designated nudist bathing spots, but it is not uncommon to see people sunbathing in the altogether elsewhere, including central Berlin’s Tierpark.