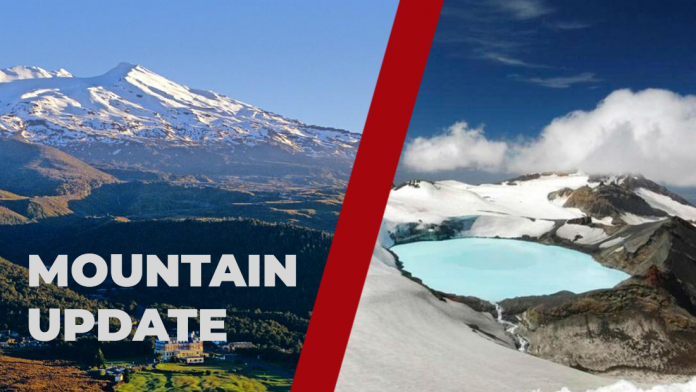 Shaking and Movement under Mt Ruapehu is now at a “moderate to strong” level despite a cooling of the crater lake.

The Volcanic Alert Level was raised to Level 2 last week after the crater lake’s temperature increased to 43C.

Since then, the lake’s water has cooled slightly to 41C, according to an update from GNS Science on Monday. Although, the level of volcanic tremor continues to be moderate to strong. Additionally, several shallow earthquakes have been recorded (the largest (M2.2) occurring on Boxing Day underneath the volcano)

In a statement GeoNet said; “We continue to closely monitor Ruapehu, and this week we will attempt a gas flight to measure volcanic gas emissions. We will also attempt to sample the water at the crater lake for further chemical analyses. Together, these will help identify processes occurring at depth beneath the volcano.”

Volcanic Alert Level 2 Meaning: Level 2 indicates the primary hazards are those expected during volcanic unrest; steam discharge, volcanic gas, earthquakes, landslides, and hydrothermal activity – However, this is not an indication of an eruption