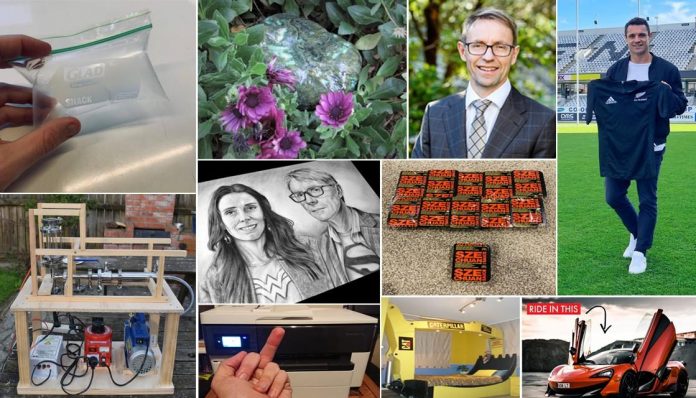 Trade Me has announced what its top listings were last year, in 2020.  Unsurprisingly, there’s one repeating theme: COVID-19

Number #1: The most viewed item was a “COVID-free bag of air”- To celebrate a negative test a Hamilton student decided to breathe into a ziplock bag and pop it up for sale on Trade

“Our team was actively monitoring the listing and when it became apparent that some bidders were not genuine, we made the call to remove it from our site. At the time we removed the auction, the leading bid was $101,200.”

Number #2: A supposed “leprechaun turd” found by a Christchurch father and son who were out for a walk during the nationwide COVID-19 alert level 4 lockdown.

“The charming listing description was written in the words of eight-year-old Pacey and told the tale of how he found the rock and came to list it onsite. It was an instant hit, fetching 157,275 views and selling for $274,” said Silvester.

Number #3: Dan Carter’s 70th All Blacks test jersey selling for whooping $21,300 – The money went to support his local rugby club Southbridge after COVID-19 brought the season to a halt. The listing was viewed 129,357 times.

Number #4: A drawing of Prime Minister Jacinda Ardern and Director-General of Health Dr Ashley Bloomfield which went for $6350

Number #5: A lunch with Dr Bloomfield atBellamys by Logan Brown at Parliament in Wellington as a Cancer Society fundraiser. The price tag on that lunch date was a tidy $13,550

“Dr Bloomfield was widely commended for his outstanding service last year, so it is fitting that he featured not once, but twice on the list.”

Damm, who knew a global pandemic could get us to open up our wallets like that!