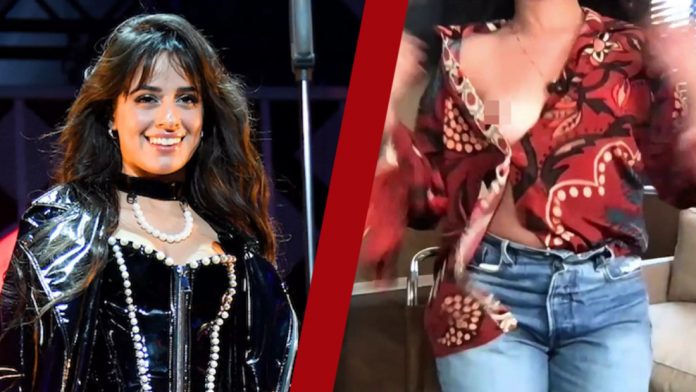 Camila Cabello has bounced back like a boss after suffering an accidental nip slip during a LIVE TV interview.

Earlier in the week, the pop star released her new single with Ed Sheeran. Following the release of the track, Cabello appeared on BBC’s ‘The One Show’

Whilst discussing her new track Bam Bam, the 25-year-old stood up to show off her favorite dance move. While adjusting her shirt the incident took place.

Check out the moment it happened.

Host Alan Carr appeared to be gasping, however, the Señorita singer continued demonstrating her dance moves and powered through the rest of the interview.

As a follow-on from the now viral TV moment Camilla posted to her TikTok making fun of the situation.

The video was captioned “When my stylist asked me if I want nip covers and I said no” with the superstar lip-syncing lyrics from Muni Long – Time Machine, “I wish I had a time machine”

She even left the message “Least they’re cute tho” in the comments of her TikTok post.

Accidents happen. Props to Camila for handling it like a pro!

You can hear Camila Cabello’s latest track ‘Bam Bam’ plus all your other favorite tunes on SKI. Find your frequency, or take us anywhere on the free iHeartRadio app!