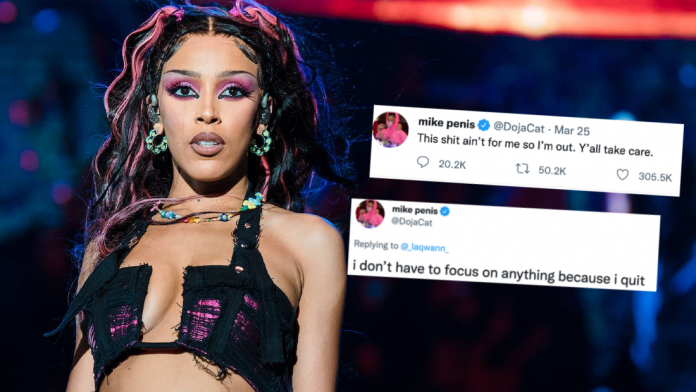 In a series of heated tweets over the weekend, pop icon Doja Cat said she “fucking quits” leaving fans a bit bemused.

Doja was supposed to play on the opening day of the Asunciónico Festival in Paraguay, however, this performance was canceled as a result of a major storm that caused extensive flooding.

People took to Twitter annoyed that the superstar didn’t interact with crowds of adoring fans who parked up outside her hotel in the pouring rain. There were also complaints that the singer didn’t acknowledge the show’s cancelation online. After the canceled Paraguay show, Doja took to Twitter and apologized for not giving the crowd at Lollapalooza in Brazil a “good enough show”

I don’t think I gave Brazil a good enough show tonight at all and I’m sorry for that but thank you guys for coming out I fucking love you and thank god we got another show tomorrow I promise I’ll do better. 💕🇧🇷

Fans in Paraguay took issue with this as they received no apology for the cancelation of their show.

it’s too late to apologize pic.twitter.com/GArQAMwf4j

And from there it spiraled

Juss bc the Paraguayans “fans” aren’t pleased with you for not doin something that you didn’t want to do, that doesn’t mean your real fans dislike you. That’s on them for not respecting your space and privacy n they can hate. But focus on the others who care and understand you

its kinda sad tho. Cause if you handled this situation like this I can imagine this happening again and again with other countries

The war of words continued between Doja and some very unhappy “fans”. This next tweet is where things went from bad to worse.

it’s gone and i don’t give a fuck anymore i fuckin quit i can’t wait to fucking disappear and i don’t need you to believe in me anymore. Everything is dead to me, music is dead, and i’m a fucking fool for ever thinking i was made for this this is a fucking nightmare unfollow me

Following that explosive tweet, the 26-year-old signed off with a message reading “This shit ain’t for me so I’m out. Y’all take care”

This shit ain’t for me so I’m out. Y’all take care.

The ‘Kiss Me More’ hitmaker then changed her name on Twitter. 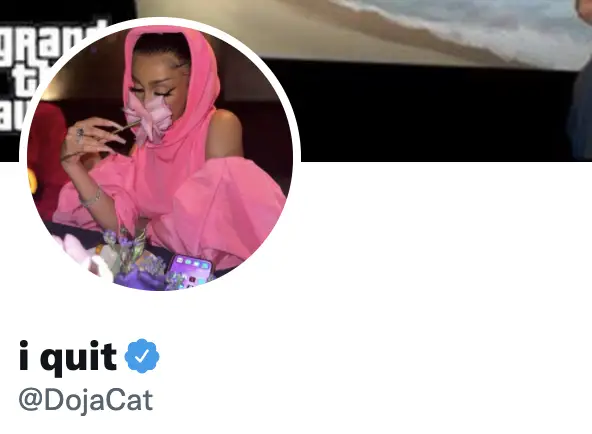 There was also a stack of other tweets that have since been deleted. Things seem to have calmed down online. We’re hoping she wasn’t serious about quitting cause that would suck.